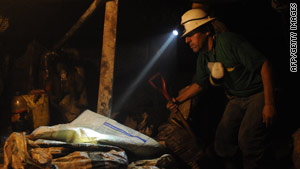 On Sunday, a miner who's part of the rescue team searches for the missing miners in Ecuador.

Quito, Ecuador (CNN) -- The two remaining miners trapped underground in Ecuador since part of a mine collapsed last week have been found dead, the mine's president said Wednesday.

Four miners were trapped in the mine collapse, and authorities had earlier found two of them dead.

Rescuers had been working to reach the two and believed they were in a tunnel thought to have water and air supplies, Ecuador's minister of non-renewable resources told the nation's state news agency on Tuesday.

The four men were trapped after a cave-in around 3 a.m. Friday in a mine in Portovelo, near Ecuador's southern border with Peru.

The accident happened just days after crews in Chile rescued 33 miners trapped underground for more than two months, in a stunning operation that gripped the world.

Jorge Espinosa, the under-secretary of mining development at Ecuador's Ministry of Nonrenewable Resources, said Friday that the caved-in mine had enough air for the trapped miners to breathe for five or six days.