'I am just one link in the chain,' Chilean mine rescuer says 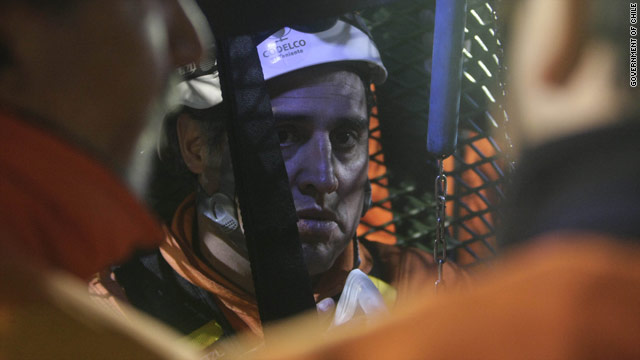 Manuel Gonzalez, who has spent 20 years in the mining industry, was the first rescuer to enter the mine and the last one out.
STORY HIGHLIGHTS

(CNN) -- Manuel Gonzalez was eager to get the rescue operation under way as he descended the shaft to the darkness where 33 miners had been trapped since August 5.

He and a team of 15 others from mines across Chile had been preparing for "Operation San Lorenzo" for a week. They'd done practice runs of readying the miners for their trip to surface and operating the metal rescue capsule bearing Chile's flag that would carry them 2,300 feet to freedom.

Each member of the rescue team was ready and able to do the job just as well as the rest, says Gonzalez -- which is why he was especially honored to be chosen as the first team member to go down to the mine.

"I was very moved because they chose me, because the whole team had the necessary skills," Gonzalez said in a press conference Thursday outside the San Jose mine site. "I had seen it on TV and I wanted to see it with my own eyes, and I wanted to start the operation."

Nothing could have prepared him for the jubilant reception -- or the intense heat -- he encountered upon entering the mine.

"They ran. One of them was already waiting for me. They hugged me and congratulated me for being the first one. But more than anything, I was very happy to see them. I mean, my first reaction was very strong because they were like in shock because temperature down there was about 40 degrees Celsius [104 degrees]."

Chile continued to celebrate the smooth success of the rescue operation on Wednesday as the miners prepared to leave a hospital in Copiapo, Chile, Thursday.

Gonzalez, a 20-year veteran of mining, said he was not particularly nervous about going into the mine, due to his years of experience and the amount of planning that had gone into Operation San Lorenzo.

The former professional soccer player had another reason to look forward to reaching the miners: the prospect of meeting Franklin Lobos, a former Chilean soccer star whom Gonzalez once regarded as an "idol."

But this time around, Gonzalez says he saw a different side of Lobos.

"I saw him almost immediately... he also remembered me, he's a great guy and he was one of the group's leaders. He was able to stay calm," he said.

With the help of Gonzalez's colleagues underground and above, the miners ascended the makeshift shaft one by one with such precision that the crew was able to shorten the length of time they thought they'd need to get each miner to the surface, from one hour to 20 minutes.

Echoing the sentiments of others involved in the rescue, Gonzalez credited the success of the rescue to solid teamwork and coordination at all stages, from planning to execution.

"I am just one link in the chain and there was tremendous discipline and order," he said. "I am just part of a great team."