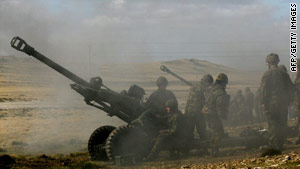 Britain, which fought a war against Argentina over the Falklands, keeps a military presence on the islands.
STORY HIGHLIGHTS
RELATED TOPICS

(CNN) -- The Argentine government continued to sound the alarm Monday about British plans to conduct military exercises on the Falkland Islands.

The ambassador said the Argentine mission also planned to ask Ban for U.N. help in negotiations between Argentina and the United Kingdom.

"These are routine military tests that have taken place every six months for the past 28 years, most recently in April this year," an office spokesman said. "Shipping alerts are always issued in advance and the tests take place entirely within Falklands territorial waters."

The disputed Falkland Islands, known as the Malvinas in Argentina, lie off the South American country's coast in the South Atlantic. The islands have been under British rule since 1833.

Argentina invaded the Falklands in 1982, prompting a war in which more than 600 Argentinean and 255 British military personnel died. Britain retained control of the islands after the war.

She tweeted that she considers it "grave, very grave" that the Royal Navy plans to go forward with the exercises, referring to the military as "colonial occupiers of the Malvina Islands."

Britain keeps a military presence on the islands, and the Falkland Islands government -- representing a population of about 2,500 -- says it remains committed to British sovereignty.

The British military issued a communique Friday announcing it would be firing missiles from the islands.

Kirchner called the exercises "the militarization of the South Atlantic and the illegitimate and reckless use of the U.N. Security Council's permanent seat."

On Saturday, the Argentine Foreign Ministry voiced the government's opposition to the exercises.

The ministry said in a statement that the Argentine government expressed "its most formal and energetic protests against wanting to go ahead with this military exercise and demands that the British government abstains from going through with this."