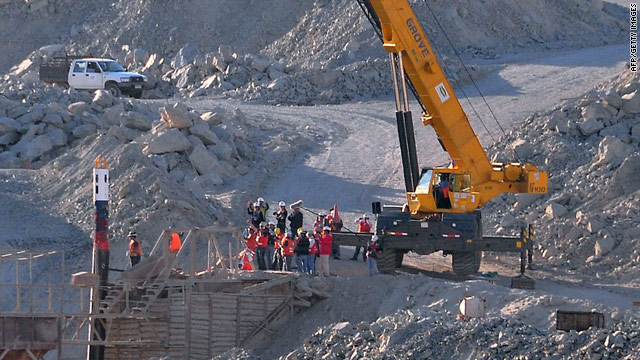 "We did a test with a capsule in a tube 12 meters long," said engineer Rene Aguilar. "We were trying to see how the capsule functions in the tube -- the wheels, the springs -- and that works perfect."

Once one of the three drills working to reach the trapped miners breaks through, a rescue capsule will be lowered at least 600 meters (1,968 feet) to begin ferrying the men to the surface.

Before the capsule goes down, though, officials said, metal casing or tubes would have to be lowered into the hole to provide a buffer between the capsule and rock.

"We will need to build a platform and bring heavy winches that can lift 400 tons," Aguilar said, "You can imagine how big they are, we will need to position them. The casing could take take 48 hours to implement."

Interior Ministry adviser Cristian Barra said that by October 8, all the personnel and equipment rescuers need -- including two additional rescue capsules and a field hospital to immediately treat the miners -- will be on site.

Officials said the tentative date they are setting for the rescue is the beginning of November but that they will be ready for a potential rescue as early as the end of next week.

The Plan B drill continued to lead the efforts to free the men, reaching a depth of 333 meters (1,092 feet) on Thursday, the government's rescue coordinator Andre Sougarret said.

The drill was taken offline for about six hours after it lost pressure while hammering at the tough Chilean rock, officials said.

On Tuesday the Plan B drill passed the halfway point to the miners, spurring a celebration in Camp Hope, the makeshift tent village where many of the miners' family members anxiously wait.

The Plan A drill -- a mining drill -- reached 148 meters (486 feet), but the hole it was drilling would still need to be widened to 70 centimeters (27.5 inches) to accommodate the rescue capsule.

Sougarret said that officials were working with physicians and psychologists to determine the order in which miners would be pulled from the mine, but said no decision had been made.

Meanwhile, the miners continued to aid with their own rescue by clearing rock that had fallen into the mine as a result of the drilling. The miners used front-loader machines that were not damaged in the collapse to clear the rubble.

Officials said the miners were clearing about eight tons of rock every 12 hours to keep the mine shaft clear.

Officials had no comment on a lawsuit filed Thursday by some of the miners' family members against the San Esteban Mining Co., which owns the mine, and the government for negligence. An attorney for 27 of the miners families filed the lawsuit, which seeks $12 million (U.S.) from the mine and government for harm inflicted on the men.

Chilean government officials has criticized the mine for not having the right safety measures in place. Chilean President Sebastián Piñera dismissed several officials in charge of mine safety after the cave-in.

"Everyone who is here recognizes and appreciates the work being done by the rescue workers," said lawyer Edgardo Reinoso. "This has nothing to do with one government or another but we have to ask why are these miners at the bottom of a mine?"

The mining company did not return calls seeking comment. San Esteban is undergoing bankruptcy proceedings and its assets are being sought by creditors. Government officials have also said the company will bear the cost of the army of rescue workers and drilling teams being flown in from around the world.

At Camp Hope, several relatives said they had not participated in the action and the lawsuit was of of little interest to them.

Said family member Maria Segovia: "I just want to get my brother out."