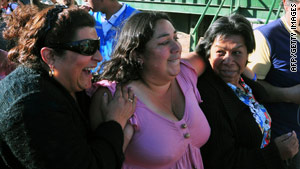 Relatives of one of the trapped miners react Tuesday upon hearing how far rescuers have drilled.
STORY HIGHLIGHTS
RELATED TOPICS

The celebration broke out as the Plan B drill reached 330 meters, said Andre Sougarret, the government's rescue coordinator. The drill is widening a 623-meter (2,040-foot) hole already drilled to the miners with a smaller diameter.

The men have been surviving on supplies funneled to them from above ground through earlier bore holes, each about four inches in diameter.

The initial bore hole for the Plan B drill reached them September 17, and the current operation is aimed at widening that hole enough to allow a man to be lifted out.

Once a wide-enough hole is drilled to reach the miners, rescuers will begin the process of preparing the hole to lower a rescue capsule to the men and pull them out one by one. The 33 miners have been trapped since August 5.

The breakthrough came after the Plan B drill dug over 100 meters in about 48 hours.

"The advance has been one of the best we have had," Sougarret said. "It's due to better continuity with the drilling."

The continuity, Sougarret said, was a result of the more stable rock that drillers had reached. Earlier in the week, officials had said that drilling in solid rock packed against looser material had caused drill bits to come loose.

One drill bit fell about 500 meters and hit the mine's floor. None of the trapped miners was hurt.

Rescue officials said all the elements needed for the rescue of the trapped miners would be on location by the end of next week.

A specially-designed rescue capsule arrived at the mine site Saturday and two more are expected to travel there soon. Sougarret said other specialized equipment, such as a field hospital, was on its way as well.

The miners have been spending their days watching the news and movies on a small projector. Many are also exercising by working out with a trainer, who leads sessions over a video conference system. Officials have said the exercise helps the men pass the days and also will assist several of them in losing weight so they can more easily fit into the rescue capsule.

Authorities said they still believe the rescue operation would be carried out in November.

"We've always said November. I am sticking to that date because of difficulties we might encounter," Sougarret said. "I am sticking with the first days of November for the rescue date."

Late Tuesday, shocks from an earthquake were felt in the vicinity of the mine. A 5.0-magnitude earthquake struck near the town of La Higuera, some 270 kilometers to the south of the mine. Sougarret said rescuers were prepared for the possibility of an earthquake and that the mine was sound. There were no immediate reports of damage from Tuesday's quake.