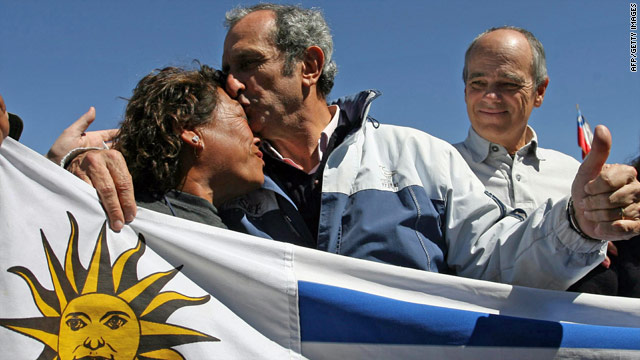 Uruguayan survivors of an aircraft that crashed in the Andes in 1972 stand with relatives of the trapped miners.
STORY HIGHLIGHTS

Copiapo, Chile (CNN) -- For months, the men waited in isolation, struggling to survive. They forced themselves to eat the flesh of dead friends to sustain themselves.

The Uruguayan rugby players whose plane crashed in the Andes Mountains 38 years ago inspired the book and movie "Alive." On Saturday, four of them shared a message with the 33 miners who have been trapped underground in Chile for a month.

"Don't give up," former rugby player Moncho Sabella said. "You have a marvelous team working for you."

Video of the conversation released by the government showed trapped miner Luis Urzua looking back at him on a video-conference screen.

"We thank you as Chilean workers and hope to be able to give you a hug later," he said.

Sixteen people on the plane endured frigid temperatures and high altitudes for 72 days before rescuers found them. A dozen of the 45 passengers onboard died in the crash. Others later succumbed to their injuries.

Video: Remembering the mine collapse

The miners are trapped in a shelter 2,300 feet below ground. It was nearly three weeks before rescuers learned they were alive, and it could take months for engineers to drill a shaft allowing them to escape.

But Sabella told reporters he saw many similarities between the miners' plight and his fight for survival.

"I understand what they are going through, I understand them completely. I feel a lot of things I felt on the mountain," he said. "They have the great advantage that they are in contact with the miners trying to save them. It's important that they stay united and follow their leaders."

Family members of the trapped miners said they were grateful for the support from the rugby players and other foreigners who have come to encourage their loved ones.

"It's very important that people come from other countries to back us up," said Maria Segovia, whose younger brother Dario Segovia Rojas is one of the trapped workers. "The miners need it, they are the ones inside."

It's important that they stay united and follow their leaders.
--Crash survivor
RELATED TOPICS

Last week, NASA experts arrived to help assess the situation and needs of the miners. They are helping design the system rescuers will use to hoist the miners to the surface.

On Friday, a new drill arrived at the rescue scene that engineers hope could reach the miners in about two months. The Chilean government has said another drilling operation, which started Tuesday, could take up to four months to reach the miners.

Officials have asked them to simulate night and day on their own and to sleep in shifts -- half the men will sleep, while the other half work and make sure their sleeping coworkers are okay, Manalich said.

Despite the difficult circumstances, the rugby players said Saturday that they shared a message of hope with the miners.

"Everything is possible if one fights to the end," former rugby player Gustavo Zerbino told reporters.