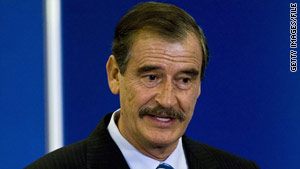 (CNN) -- Former Mexican President Vicente Fox has come out in favor of legalizing drugs in an attempt to disrupt the illegal markets that have turned parts of Mexico into battlegrounds.

In a proposal published over the weekend on his website, Fox argued that drug addiction and drug-related violence should be treated as distinct and separate challenges.

"So, drug consumption is the responsibility of the person who consumes; of the family who is responsible for educating; and of the education system and the socioeconomic context," wrote Fox, who was president from 2000 to 2006. "What we have to do is legalize the production, the sale and the distribution."

Although Fox and current President Felipe Calderon both hail from the conservative National Action Party, or PAN, their views diverge on the issue of how to combat drug violence.

While Fox advocates weakening the cartels by legalizing their market, Calderon has launched an offensive against the drug cartels that has resulted in headline-grabbing drug-related violence in some parts of Mexico. According to the government, more than 28,000 people have been killed in the drug war since Calderon took office in 2006.

Fox said Mexican troops should return to the barracks. The army was not designed nor trained to fight organized crime, Fox said. Removing the troops would also ensure that soldiers would not cross the line into human rights abuses.

In his proposal, Fox also called for the creation of a single national police to provide security, arguing that current state and local police bodies have become corrupted. Some teams from the military could be added to the new police force, he said.

A third proposal was for citizens to directly elect police chiefs, commanders and others in charge of security.

"Legalizing in this sense doesn't mean that drugs are good or don't hurt those who consume," Fox wrote. "Rather, we have to see it as a strategy to strike and break the economic structure that allows the mafias to generate huge profits in their business."