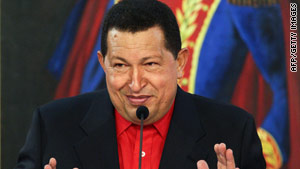 (CNN) -- Venezuelan President Hugo Chavez said Thursday that he is breaking off relations with Colombia. His decision comes as the Organization of American States meets to discuss Colombian claims that Venezuela is protecting FARC and ELN rebels in its territory.

The move is the biggest escalation in a year of simmering tensions between the two countries and their presidents.

Chavez said that under President Alvaro Uribe, Colombia has isolated itself and become "aggressive and violent."

He called Uribe "crazed" and accused the United States of using Uribe as a puppet.

Uribe is in the final month of a presidency that has had many tensions with neighboring Venezuela, mostly over accusations that rebels from the Revolutionary Armed Forces of Colombia (also known as FARC) and National Liberation Army (ELN) have camps in Venezuela.

Chavez said he hoped for better relations with Colombian President-elect Juan Manuel Santos, who was Uribe's defense minister and whose election was viewed as an affirmation of Uribe's policies.

The Venezuelan leader spoke from his presidential palace, where he was holding a news conference with Argentine soccer coach Diego Maradona. Maradona's visit was unrelated to the spat with Colombia.

Venezuela recalled its ambassador to Colombia on Friday in reaction to the accusations of protecting rebels.

Uribe is a two-term president who has received high approval ratings for his tough stand against FARC guerrillas, who have been waging war against the government for decades.

Thursday was not the first time Chavez cut off diplomatic ties with Colombia.