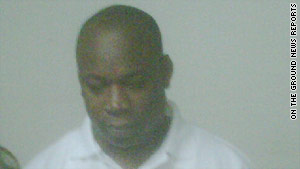 Kingston, Jamaica (CNN) -- Police in Jamaica issued a plea for calm after the arrest of alleged drug lord Christopher "Dudus" Coke outside Kingston.

The arrest occurred just outside the capital city on Tuesday afternoon. A failed attempt to arrest Coke last month resulted in four days of gun battles between security forces and his supporters that left 76 people dead, and authorities want to avoid a repeat of the violence.

"I would like to appeal to the families, friends and sympathizers of Christopher Coke to remain calm and to allow the law to take its course. I also [would] like to assure the citizens of Jamaica that the situation remains normal, there is no need for alarm and they can get about their normal businesses in the usual way," Police Commissioner Owen Ellington said on Tuesday.

Ellington told reporters that police acting on intelligence picked up Coke, 41, and took him to the Spanish Town Police Station in St. Catherine. From there, he was taken via helicopter to Kingston, Ellington said.

Police will be taking "every step possible to ensure his safety and well-being whilst he is in our custody," Ellington said.

The police high command was meeting Tuesday night with the police director of public prosecution to begin the process of extradition to the United States as soon as possible, Ellington said.

"The legal proceedings will commence immediately. Once we are able to settle on the issue of legal representation and reach an agreement with the director of public prosecutions on where the hearings will be held, a court date will be set and we anticipate that we can achieve that within 48 hours," Ellington said.

The U.S. Attorney's Office hailed the arrest after a five-week manhunt by local authorities.

"We look forward to working closely with the Jamaican authorities to bring Coke to justice to face charges pending against him in Manhattan federal court," said Preet Bharara, the U.S. Attorney for the Southern District of New York.

Coke, who is wanted in the United States on gun and drug trafficking charges, was en route to the U.S. Embassy in Kingston accompanied by the Rev. Al Miller when Jamaican police recognized him at a checkpoint and took him into custody, the minister told a reporter for Radio Jamaica.

Ellington called for Miller to contact police "because we have an interest in interviewing him."

He maintained a heroic reputation in the Kingston slums, with some people comparing him to Robin Hood, Jesus and one-time Colombian kingpin Pablo Escobar.

His popularity stemmed from his community efforts, including handing out food, sending children to school and building medical centers.

But drug enforcement officials say he deserves to be classified as one of the world's most dangerous drug lords.

"He is the head of an organization, a cartel, or a syndicate that has a global impact and also has a direct impact on the United States," said Michael Braun, a former chief of operations for the U.S. Drug Enforcement Administration.

Coke was charged in August 2009 by the U.S. attorney's office in New York, which accused him of leading an international criminal syndicate known as the "Shower Posse."

Journalist Kirk Abrahams contributed to this story from Kingston.