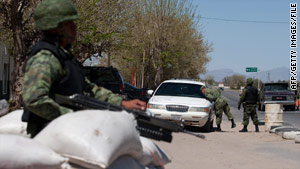 (CNN) -- Gunmen shot and killed the mayor of the Mexican town of Guadalupe as his wife and child watched, the mayor of nearby Ciudad Juarez told CNN.

Ciudad Juarez Mayor Jose Reyes Ferriz said Lara, who maintained what was apparently a second home in Juarez, was killed outside that house as he walked to his car.

"He was a very good man, a man set on bringing law and order to that city," said Reyes.

Lara, who became the mayor of Guadalupe in 2007, had apparently taken up residence in Juarez to protect his family, Reyes told CNN. He kept his official home in Guadalupe.

"He was killed in the eastern part of Juarez ... he never told me he had a house here, he never asked for protection from the city," the Juarez mayor said.

Reyes said violence increased in Guadalupe since 2,000 federal troops arrived in Juarez early in the year. Guadalupe -- a city bordering Hudspeth County, Texas -- once had 40 policemen but is now left with four, he said.

The northern Mexico state of Chihuahua is one of the main battlegrounds for rival drug cartels fighting for access to the U.S. drug-trade corridor.

Reyes said he had a long partnership with Lara as both mayors rallied for more support for border cities in the war against drug cartels.

"His [Lara's] case is the best proof that the fight against the flow of drugs into the U.S. is right at the border," said Reyes.