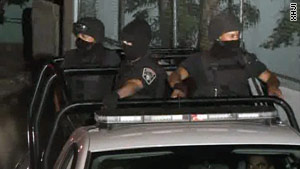 The killings occurred around 11 p.m. at the Faith and Life rehab facility in the city of Chihuahua, located in the border state with the same name.

Witnesses told authorities the armed men marched 23 people outside, lined them up and shot them, Notimex said, citing Director of Police Intelligence Saul Hernandez. The wounded were taken to hospitals under heavy guard, the news agency said.

Shootings at drug-treatment centers have become more common as Mexico's drug cartels and street gangs ramp up their violence against each other.

Another 10 people were killed that same month in an attack on the Anexo de Vida center in Ciudad Juarez.

A similar assault at another Juarez drug facility in March 2009 killed 20 patients.

More than 22,000 people have died in drug-related violence since Mexican President Felipe Calderon declared war on the cartels shortly after taking office in December 2006. Much of that violence has taken place in northern border states, particularly Chihuahua, where Ciudad Juarez is located.

Juarez is the most violent city in Mexico and one of the top in the world, officials have said.

Calderon expressed his condolences Friday to the families of the latest victims.