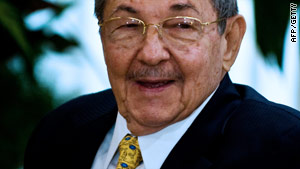 Sugar Minister Luis Manuel Avila Gonzalez was fired after requesting his release because of admitted shortcomings in his own performance, according to an official statement published Tuesday in the country's state-run newspaper. Orlando Celso Garcia Ramirez will replace him, it said.

Transportation Minister Jorge Luis Sierra Cruz was fired due to "errors in the performance of duties," state media reported. He also lost his post as a vice president on a top governing body called the Council of Ministers, it said.

President Raul Castro, once the world's longest serving defense minister, assumed the presidency in 2006 when his older brother, Fidel Castro, stepped down because of illness -- at first temporarily, and then permanently in 2008.

Since then, many analysts have speculated that the younger Castro has worked to consolidate power, replacing top government posts with army brass.

"Of course this is Castro solidifying control," she said, "but it's also an attempt to impose a culture of governance and efficiency" in leadership positions that "under Fidel were very uneven."

Sweig and others contend that recent changes in leadership may be part of broader economic measures intended to streamline Cuba's bloated state sector, which Raul Castro recently said has supported an excess of up to a million workers.

Once a world leader in sugar exportation, Cuba has faced a steady decline since the collapse of the Soviet Union and the accompanying subsidies that once boosted sugar production on the island nation.

Widespread speculation suggests the country may eventually close its Sugar Ministry or even open it up to foreign investment in an effort to boost Cuba's cash-strapped economy.

"If that pans out, they may be bringing in someone [at the Sugar Ministry] who is more suited to that task," said Cuba analyst Phil Peters from the Lexington Institute in Washington.

"It may be aimed at foreign investment," he said, adding that "Brazil and others could really help turn that sector into an energy producer."

The move comes only weeks after Cuba instituted a pilot program of turning over hundreds of state-run barber shops and beauty salons to employees.

Monday's replacements come on the heels of the removal of Rogelio Acevedo, long-time head of the country's airlines and airport.

While no official explanation was given for Acevedo's release, it prompted widespread speculation of corruption.

"Corruption is the real counterrevolution," Morales wrote, cautioning against groups entrenched in the country's Communist system.