(CNN) -- Eight of the 10 Americans once detained in Haiti landed late Wednesday at Miami International Airport, according to CNN affiliate WFOR.

All 10 Americans face charges of kidnapping and criminal association for trying to take 33 children out of Haiti after the nation's earthquake. The Americans have said they were trying to help the children get to a safe place after the magnitude-7.0 earthquake.

The eight Americans were freed on bail by a judge earlier on Wednesday. 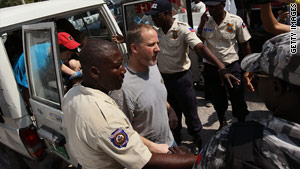 Stay tuned to CNN.com for more details to this developing story.