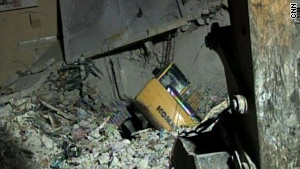 Port-au-Prince, Haiti (CNN) -- Search-and-rescue efforts at a supermarket in Haiti's capital have ended after teams determined no one else was alive beneath the rubble, an official told CNN Wednesday.

A French excavation team was working at the Caribbean Supermarket on Tuesday. Several Haitians had been in the building at the time, looking for survivors or useful items. At least one of these foragers became trapped in the rubble. While the French team was trying to rescue that person, their excavation machine, which resembles a bulldozer, tipped into a hole and caused a further collapse, said Lt. Col. Christophe Renou of French Civil Protection.

The French team called in U.S. and Mexican teams to help with the rescue. The U.S. team brought more radar and lifting devices to try to extract the known survivor and reach any others, said Norman Skjelbreia, an incident commander from the U.S. Army Corps of Engineers.

But at 11 p.m. Tuesday, the teams determined there was no one else alive under the rubble, and they called off the rescue mission, Renou told CNN Wednesday.

He said information gathered from radar and listening equipment detected no signs of life.

The rescue was an extremely dangerous one, he said, with pieces of concrete shifting. At one point, he said, a female Mexican rescue worker was trapped under the rubble and teams had to work to save her life.

It was decided that the safety of the search-and-rescue teams was more important than the search to retrieve bodies from the precarious collapsed building, Renou said.

Caribbean Supermarket was the scene of a number of rescues after the earthquake, including the rescue of five people in one weekend.

Rescuers pulled an apparent survivor of the original quake, Evan Muncie, 28, from the rubble of another market on Monday. Doctors found him suffering from extreme dehydration and malnutrition, but without significant crushing injuries.