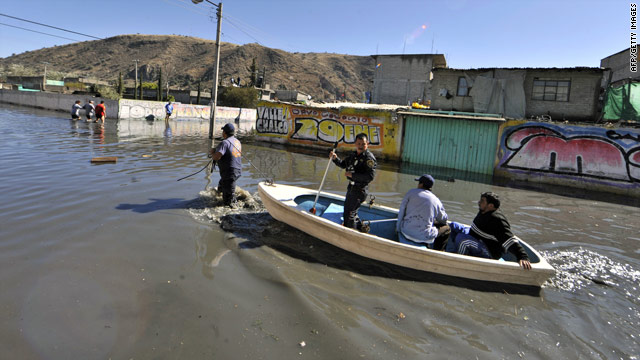 More than 3,000 homes have been flooded in Valle de Chalco, a city on the eastern outskirts of the Mexico City metro area.
STORY HIGHLIGHTS
RELATED TOPICS

Most of the deaths -- 30 -- have occurred in eastern Michoacan state, on the central Pacific coast. The state attorney general's office released a list of the deceased Tuesday.

The remaining 11 deaths resulted from a mudslide Saturday near the small town of Temascaltepec in neighboring Mexico state.

The death toll in Michoacan had been 27 until three additional bodies were discovered Tuesday.

Godoy said officials are focusing on three tasks: searching for anyone who is alive, recovering bodies and removing boulders and downed trees. Officials are under pressure to act quickly, he said, because another cold front with more possible rain is expected within the next few days.

More than 3,500 Michoacan residents are homeless, the state government said on its Web site.

In addition to Michoacan and Mexico states, unusually heavy rain in the past week also flooded parts of Mexico City, the nation's capital.

Up to 37,000 people nationwide have been affected, government officials said.

National Water Commission Director Jose Luis Luege said Tuesday that contaminated water from a sewage network there that overflowed Friday will continue to flood the town for at least another 48 hours. The break in the sewage pipe had been fixed, but it burst again.

Officials also built two dikes to contain the sewage but were unable to use them out of concern that they would burst under the intense pressure from the floodwaters, Luege said.

"It's a very complicated operation," he said.

More than 3,000 homes in Valle de Chalco were flooded.

Mexico state is bordered on the west by Michoacan and adjoins Mexico City on three sides -- north, east and west.