Volunteers in Haiti take a breath, find time to cry 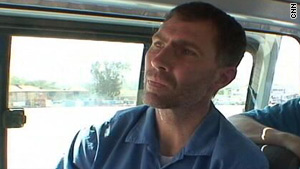 Gary Garner is a doctor from Utah who has spent the week volunteering in Haiti.
STORY HIGHLIGHTS

Port-au-Prince, Haiti (CNN) -- Like many people who have done their time in Haiti, Gary Garner needs a good cry.

In the past five days, the Salt Lake City, Utah, physician has held a dying man in his arms and amputated more fingers and toes than he can remember. Now, he needs a rest.

Friday found him on the tarmac at the Port-au-Prince airport, searching for a way back to a normal life.

"We're going to go home and cry," Garner said in a low voice.

Then quietly, gently, with the suffering showing in his eyes as he looks away, he starts to cry. The pain can't wait for home.

Elizabeth Bellino couldn't wait either. The New Orleans, Louisiana, pediatrician sat in her car Friday and wept because doctors at another nation's hospital would not accept a truckload of food and water from her. Nor would they let her pick up patients to take back to the University of Miami field hospital, where she's been volunteering this week.

"It's so frustrating," Bellino said afterward. "Why would they do that?"

There's much crying in Haiti. There's certain to be more once caregivers and others get home.

For now, though, the work continues.

Bellino had an increasing patient load at the hospital, located in a dusty field adjacent to the Aeroport International Toussaint L'Ouverture. A 5.9-magnitude aftershock Wednesday had given her new patients.

Even though Garner was trying to figure out how to get home, he still kept tending to patients being brought to a landing zone in three private helicopters.

Those helicopters belong to Utah businessman Jeremy Johnson, who offered to take a medical team to Haiti after last week's 7.0-magnitude earthquake killed tens of thousands and injured thousands more.

Garner was a last-minute addition to a team put together by financial adviser Craig Nelson, a neighbor in Utah.

Nelson had been to Haiti on a Mormon mission 20 years ago, along with Steve Hansen and Chuck Peterson, now both Utah physicians. When Nelson heard about the earthquake, he decided they needed to go. Hansen and Peterson readily agreed.

They were dropped off Monday at the coastal city of Leogane, nearly 20 miles (30 kilometers) west of Port-au-Prince. The city was at the epicenter of last week's earthquake, and some reports say up to 90 percent of Leogane's buildings were damaged or destroyed.

The U.S. doctors were among the first caregivers to arrive and were later joined by teams from Cuba, Germany, Canada and other nations. Unlike what happened to Bellino in Port-au-Prince, everyone got along fine in Leogane.

"It was like the United Nations of medical work," said Nelson.

"There were no nationalities," Garner said.

They treated about 300 patients. The medicine was often rudimentary because of a lack of supplies.

One doctor used a Leatherman tool to amputate a man's lower leg. Doctors also used a rack from the back of a bicycle as a makeshift orthopedic splint, screwing it into the patient's leg bones.

The days were long, bleeding deep into the night. Sleep lasted three or four hours.

"We worked until our headlamps ran out of batteries and then people would bring us batteries," Garner said.

"You can sleep when you're dead," he said. "And I'll have plenty of time to sleep this weekend."

And, no doubt, have a good cry or two.