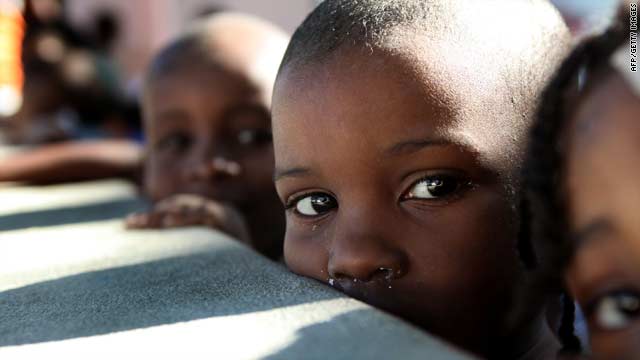 Haiti was home to an estimated 380,000 orphans before the earthquake. That number is expected to grow.
STORY HIGHLIGHTS

Watch "Haiti How You Can Help" a special two-hour edition of Larry King Live with Ben Stiller, Scarlett Johanson and many others, and learn how you can take immediate action to aid earthquake victims. Tonight 8 p.m. ET. Also on CNN International Tuesday CET 2 a.m. and 11 a.m. / HK 9 a.m. and 6 p.m.

Port-au-Prince, Haiti (CNN) -- Slashing red tape or ignoring ordinarily required paperwork, officials in the United States and the Netherlands have cleared the way for scores of Haitian orphans to leave their earthquake-ravaged homeland, according to officials from the two countries.

All of the children had adoptions pending with prospective parents in the two countries before Tuesday's 7.0-magnitude quake, and government officials said paperwork was expedited or put on hold to make transfers happen on an emergency basis.

300 children have pending adoption cases with American families. Six children arrived in Florida Sunday night, met by their adoptive parents with hugs and tears of happiness.

The Dutch Ministry of Foreign Affairs has chartered a plane to pick up about 100 children Monday, spokesman Aad Meijer told CNN.

Dutch Justice Minister Ernst Hirsch Ballin over the weekend granted the children entry into the country, although their paperwork, including travel and adoption documents, was incomplete, Justice Ministry spokesman Patrick Mikkelsen told CNN.

About 44 of the orphans' adoptions had yet to be approved by a Haitian judge, even though they were matched to Dutch parents, Mikkelsen said. Dutch officials may seek the remaining approvals from Haiti once the children have already settled in the Netherlands, he added.

Haiti is home to about 380,000 orphans, according to the United Nations Children's Fund, and that number is expected to grow in the wake of Tuesday's earthquake. And those who lived in orphanages before Tuesday may be homeless now, as reports of destroyed orphanages have come throughout the quake zone.


CNN's Melissa Gray and Richard Greene in London contributed to this report.