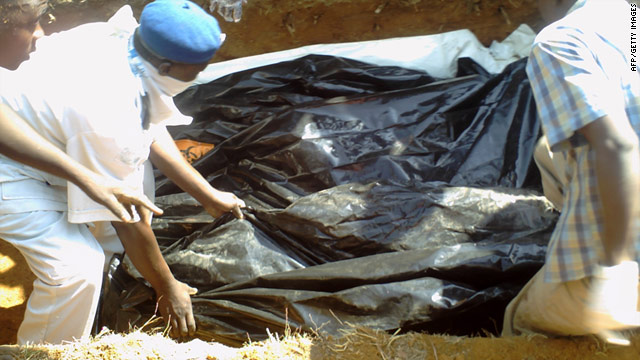 Bodies of people killed in the recent bomb attacks are buried Monday at the Naraguta cemetery in Jos, Nigeria.
STORY HIGHLIGHTS
RELATED TOPICS

(CNN) -- Three men were arrested with bombs in their possession one day after blasts ripped through the Nigerian city of Jos on Christmas Eve, a government official said Monday.

"They were heading to bomb a church when they were arrested," said Gyang Choji, a special advisor to the governor of Nigeria's Plateau state. He said one of the suspects is a citizen of the Republic of Chad, while the other two are Nigerian.

Choji did not say the men, who were arrested in the area of Dogon Dutse, were suspects in the Christmas Eve attacks, which killed at least 31 people and wounded 74. He had previously said it was unclear who set off the blasts or whether they were related.

"The security persons are carrying out the investigations," Choji said.

Jos lies on a faith-based fault line between Muslim-dominated northern Nigeria and the mainly Christian south.

Following the blasts, angry residents and young men took to the streets where they clashed with the military.

"On the 25th, as a result of the bombing on Christmas Eve, the angry youth in Angwan Rukuba were shouting and came out on the streets and demanded that the soldiers be removed from the streets," said Choji.

Two young men were killed by gunshots fired by soldiers and 25 people were wounded, he said.

Residents of Angwan Rukuba held a press conference Sunday, condemning the soldiers responsible for the shooting. Community members are also petitioning the government to request that those responsible be brought to justice, Choji said.

In recent weeks, the governor's office had received letters purported to be from some Muslim organizations threatening attacks against Christians, Choji had said previously.

"The security officials didn't take the threat letters seriously. They were thought of as gimmicks, and at the end of the day, they became reality," he said.

The government had increased security and checkpoints throughout the past week, including additional patrols in various areas of Jos, Choji had said.

In Nigeria -- Africa's most populous nation -- more than 13,500 people have died in religious or ethnic clashes since the end of military rule in 1999, the Human Rights Watch said in a report earlier this year.

There have been other deadly sectarian clashes in Nigeria over the years, including one outbreak in Jos in September 2001 that left about 1,000 dead, the Human Rights Watch said.