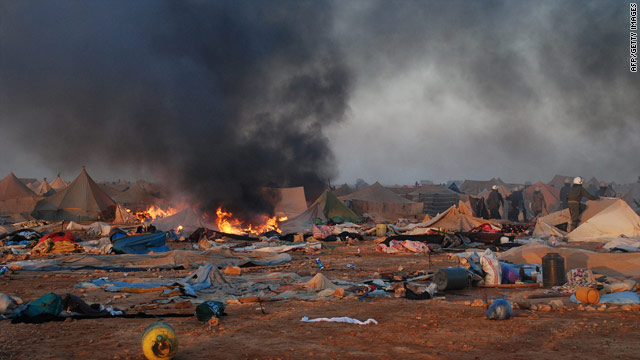 The violence coincided with a round of talks -- informally backed by the United Nations -- between Morocco and representatives of Polisario Front, the region's independence movement.

Ahmed Boukhari, a Polisario representative, told CNN in an e-mail Tuesday that "the tragic events" were "the result of a deliberate act carried out by Morocco to undermine the current U.N. peace process."

Morocco annexed the territory in the mid-1970s after Spain gave up control, and guerrilla warfare with the Polisario -- which favors independence for the region -- ensued until a U.N.-brokered cease-fire ended the violence in 1991.

Morocco is offering an autonomy proposal for the territory, which would maintain Moroccan sovereignty but allow for some local administration. Polisario says the final status should be determined by a popular referendum that includes the option of independence.

As for the Monday violence, the Polisario said Moroccan forces stormed a camp where approximately 20,000 Saharawis, or Western Sahara residents, have spent a month protesting what it says is the "lack of employment opportunities and discrimination under the Moroccan occupation."

Morocco's news agency, MAP, said the security forces' operation was designed to "set free old people, women and children who were under the grip of individuals with criminal records and wanted for common law crimes in the camp of Gdim Izik."

The third round of the U.N.-backed talks ended this week, with both sides agreeing to continue discussions in December and early next year.

The meetings took place in the New York City area at the invitation of Christopher Ross, the U.N. secretary-general's personal envoy for Western Sahara.

A communique issued at the end of talks Tuesday night said there were "broad and frank" discussions of each side's proposals, but "each party continues to reject the proposal of the other as a basis for future negotiations," the United Nations said Wednesday.

The communique cited confidence-building measures, such as flights aimed at connecting Sahrawi refugees living in camps in Algeria's Tindouf region with their relatives in Western Sahara.

The neighboring countries of Algeria and Mauritania are also involved in the discussions about the territory.