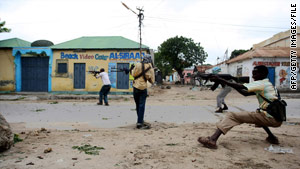 Mogadishu has been a site of frequent skirmishes between Islamist fighters and government forces.
STORY HIGHLIGHTS
RELATED TOPICS

In the first incident, militants were working on a car bomb in a house near Shirkole, north of the capital, when the device detonated, killing 10, the government said in a news release Saturday.

Another Al-Shabaab member was killed while planting a roadside bomb on Mogadishu's Ansaloti bridge, according to the release. Authorities arrested two other individuals suspected of guarding the militant who died.

"This is clear evidence that Al-Shabaab are planning death and destruction during this holiest of months, Ramadan," Interior Minister Abdikadir Ali Omar said. "Only luck has prevented the deaths of many innocent citizens of Mogadishu."

This month, militants with Al-Shabaab -- an al Qaeda-tied group battling Somalia's U.N.-backed transitional government -- had vowed to speed up fighting during Ramadan, a month of sunrise to sunset fasting for Muslims.