Obama to be briefed on government's hurricane readiness 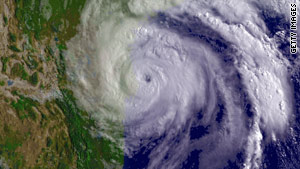 Forecasters say the 2010 Atlantic hurricane season could be above average this year.
STORY HIGHLIGHTS
RELATED TOPICS

(CNN) -- Forecasters with the National Oceanic and Atmospheric Administration will release their seasonal outlook for this year's hurricane season Thursday morning.

President Obama will also be briefed Thursday on the federal government's readiness.

Forecasters say the 2010 Atlantic hurricane season, which starts on Tuesday, will be above average, with 15 named storms and eight of those becoming hurricanes.

Colorado State University's forecasters William Gray and Phil Klotzbach released a report in April, saying that this year's hurricane system could be difficult.

Forecasters said that El Nino conditions will dissipate by summer and that unusually warm tropical Atlantic surface temperatures will persist, leading to favorable conditions for hurricanes to develop and intensify.

Of the eight expected hurricanes, the forecasters predict that four will strengthen to major ones, meaning Category 3 or higher on the Saffir-Simpson scale. Category 3 storms have sustained winds of at least 111 mph.

However, the two forecasters emphasize that the prediction is preliminary and revised ones will be released on June 2 and August 4.

A typical season has 11 named storms, six hurricanes and two major hurricanes, according to the National Oceanic and Atmospheric Administration. The hurricane season ends November 30, although later storms have been known to happen.

Last year's hurricane season was below average, with only nine named tropical storms, three of which were hurricanes. The National Hurricane Center said it was the lowest number of tropical storms for the Atlantic basin since 1997.