(CNN) -- The Red River at Fargo, North Dakota, reached "major flood stage" early Wednesday as the National Guard and a small army of volunteers filled sandbags to keep the waters at bay.

"Everybody is just focused on battling it once again, and they're doing it with smiles on their faces," said Staff Sgt. Amy Wieser Willson of the North Dakota National Guard.

Are you there? Send photos, video to CNN iReport

"Major flood stage" is a term the National Weather Service uses to describe flooding causing "extensive inundation of structures and roads" and possibly the "significant evacuations of people and the transfer of property to higher elevations."

"[It's] very stressful for a lot of people, especially after seeing how much damage and how long the flood fight went on last year," Willson said. About 300 people were helping on the sandbag lines as the community raced to fill 1 million of them.

See local coverage of the flooding

Torrey Callies spent a couple of days helping shield his Fargo neighborhood from the rising waters.

"We're making some good headway here," he said at midday Wednesday, as volunteers finished a sandbag dike. The sandbag levee is meant to hold back what's known locally as Meadow Creek, which branches off from the rising Wild Rice River.

"Everybody that lives here went through it last year, so everybody is well-schooled in how to do this," Callies said.

Still, "there's not the sense of deathly emergency that there was last year," he said.

At least 150 volunteers -- most of them high school and college students -- helped in the neighborhood Tuesday, Callies said.

"God bless 'em for showing up, because without volunteer help, we'd never get this done," said Callies, 44, who owns a collection agency with his brother. "In my book, that's a pretty cool thing to do."

The mess it makes of back muscles and backyards is worth it, he said.

"You want to keep your house dry, and that's the main thing," Callies said. "The grass will grow back." 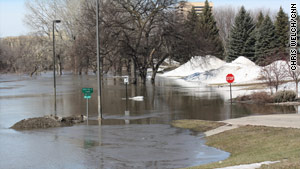 Melting snow has caused the Red River to swell. On Wednesday, the river was 12 feet above flood stage.

"It's tough because it's awful work and it's hard on the back and it's stressful, but what do you do? You just suck it up and start throwing sandbags."

Last week, warm weather and rain melted snow south of Fargo and Moorhead, Minnesota, causing the Red River to swell. Upstream, snow and ice have yet to melt, pushing water back toward the two cities.

Meanwhile, along the Eastern Seaboard, utility crews made steady progress restoring electricity after a powerful nor'easter whipped the region over the weekend.

"We know how difficult this is for our customers, and we appreciate their patience," said John Miksad of Con Edison. "With each reconnection, we focus on restoring the greatest numbers of customers possible."

The outages were due mostly to power lines downed by Saturday's hurricane-force winds, which knocked over trees and utility poles. At least seven deaths were attributed to the storm, five caused by falling trees, authorities said.