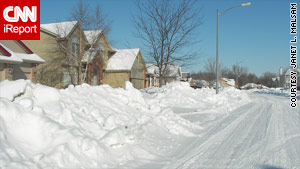 iReporter Janet L. Malsam of Omaha, Nebraska, says "it's painful" to be outside.

(CNN) -- A days-long cold spell eased Wednesday, but for much of the nation, even lower temperatures are on the way.

The arctic blast that began over the weekend has been blamed for at least six deaths across the nation.

Wednesday and Thursday will offer a brief respite to some areas in the South, according to CNN meteorologist Rob Marciano.

"There'll be a brief warm-up," Marciano said. "This is a one-two punch basically, and with the second punch, temperatures are about 5 degrees colder. But the brunt of the cold air will ride down the Mississippi River."

While midday temperatures in parts of north and central Florida rose to around 48 degrees, the overnight lows were of concern, Marciano said.

"It obviously warms up during the day, but to have this many nights [of cold weather] in a row, they haven't seen this in 20 years," Marciano said.

Precipitation continued Wednesday across a swath of the nation's midsection with parts of Missouri, Nebraska, Iowa, Minnesota and Illinois under winter storm warnings, the weather service said.

A blizzard warning was in effect for parts of South Dakota until Thursday morning, the weather service said.

Parts of Arkansas, Mississippi and Louisiana were under a hard freeze warning Wednesday morning, the weather service said.

Florida is under a state of emergency because of the threat to the state's lucrative crop industry. Gov. Charlie Crist's order Tuesday aims to help farmers across the state salvage what they can by lifting weight limits on trucks and allowing them to get already harvested crops out of the cold.

"The big story across Florida is the duration of this cold air," Marciano said.

Meanwhile Wednesday, workers whose jobs pitted them against the cold temperatures looked for ways to stay warm.

If your pipes freeze, remove layers and wrap pipes in rags. Open faucets and pour hot water on them in the areas most exposed to cold.

Use care with space heaters -- make sure they are not near anything that can catch fire.

"What we experience as mail carriers is that you've got to wear thermal long pants because your uniform is so thin," Brookshire said. "And if you don't have any kind of gloves, you'll find it difficult to handle the mail," he said.

In Chicago, a 30-year-old woman found face down but alive in the snow Tuesday night outside her home was charged with child endangerment, according to CNN affiliate CLTV.

Deaths attributed to the cold included a homeless man found frozen to death in Kansas City, Missouri, CNN affiliate KCTV reported. At least four cold-related deaths occurred in Tennessee, including an 81-year-old Alzheimer's patient who apparently wandered outside during the night, police said.

In Lauderdale County, Mississippi, coroner Clayton Cobler confirmed that a 68-year-old man was found dead of hypothermia Tuesday in his home. The man lived alone, and heaters in his home were found to be not working, Cobler said.

In Cherokee County, South Carolina, officials said a man was found Wednesday afternoon dead in a tent behind a BP gas station, according to CNN affiliate WYFF. The coroner said they believed the man had died of hypothermia a couple of days ago.

In Florida, growers are spraying water on their trees to form a protective coating of ice, said Andrew Meadows, spokesman for Florida Citrus Mutual, a trade group representing about 8,000 growers. As long as temperatures don't drop below 28 degrees for more than four hours, damage should be minimal, he said.