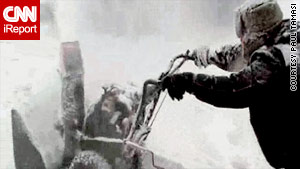 (CNN) -- Chris Giard's kids figured school was going to be closed. After all, a 40-year-old snowfall record was shattered over the weekend, as Burlington, Vermont, saw some 33.1 inches of snow -- the greatest in its history.

Giard's kids figured that would translate into no school Monday. And they knew just the man to lobby: Giard is the director of facilities for the Burlington School District, the man who makes the decision to close the school because of inclement weather.

But sadly, Giard's children -- and the rest of the 3,600 children in the district -- were packed off to class Monday.

"The city did a great job cleaning the streets," said Giard. "It's Vermont in the winter; we're going to get snow."

Since last week, the National Weather Service had warned Vermonters of the storm poised to strike the Champlain Valley.

It was forecast to arrive on Saturday morning, bringing eight to 14 inches of snow. But a low-pressure storm over Nova Scotia retrograded and moved west toward Maine and New Hampshire, bringing increased moisture, lowered temperatures and strengthened northern winds -- all key ingredients for a lot of snow.

"When you consider all these elements, it's not surprising we got hit with more snow than anticipated," said Eric Evenson, a meteorologist from the National Weather Service in Burlington, which is perched on the shore of Lake Champlain. "But it wasn't a heavy snow -- it was pretty light and easy to manage."

Vermonters, perhaps accustomed to cold temperatures, seem to have embraced the storm, and call the snow light, fluffy and beautiful.

Michael Townsend, executive editor at the Burlington Free Press newspaper, said the snowfall was more picturesque than treacherous. "It was gorgeous," he said. "When I woke up, the snow was up to my waist in the front yard. There wasn't a lot of wind. It was just pretty to look at."

Charlie Yerrick, the director of skiing at the Trapp Family Lodge that sits just to the east of Burlington in Stowe, said for the third straight year, the snowfall has been ideal. "The more the merrier," he said, while he caught his breath after shoveling at the resort." I see the sun peeking out right now and I'm going to get my camera and take some pictures."

Steve Goodkind, Burlington's director of public works, said snow removal is an important function of the city's government, which allocates $500,000 a year for removal of about 73 inches the city typically receives.

He said the weekend's snowfall probably hurt the city's budget since he was forced to more than double snow crews. What's more, the snowfall occurred on a holiday weekend and lasted for two days.

"Was this the worst snowfall I've seen here?" asked Goodkind. "No. On Valentine's Day, 2007, we were hit hard with a blizzard that had heavy snow. But this was definitely something."

Goodkind has planned a "snow dump" for Monday night; trucks remove snow from city streets and dump it into a large former oil tank farm in the city.

Fletcher Allen Health Center, the area's main hospital, has contingency plans in place in the event of a large snowfall, but was not forced to implement them, said spokesman Mike Noble, because the storm was slow-moving and happened on a holiday weekend when only a small number of patients were hospitalized.

Colder temperatures often assist in a snow's fluff factor. The ratio varies, but in general, the colder the temperature, the less moisture is needed for higher amounts of snow. Colder temperatures in the teens can increase snow amounts by five inches, said Evenson.

"The low-pressure storm made the temperature drop," said Evenson. "That's why we had fluffy, pretty snow."

Scott Whittier, warning coordination meteorologist at the National Weather Service in Burlington said, "We've endured snowfall like that before, but this was a substantial storm. It's historic."