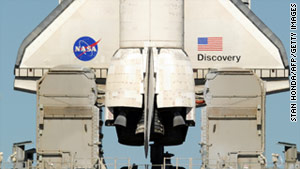 "It's definitely getting us back to launch posture," said Mike Moses, the launch integration manager.

The collection of data from the test, which began early Friday, will continue through Saturday, NASA said.

"Eight technicians will use scanners, cameras and high-powered lenses to survey the outside of the tank for foam cracks, ice buildup or other abnormalities," a NASA statement said.

The test at the Kennedy Space Center in Florida will give engineers key data to decide when the shuttle can take off, NASA said.

The earliest possible launch date is February 3, according to the agency.

The data is being retrieved from gauges and sensors placed on Discovery's external fuel tank to monitor any fluctuations.

Cracks found in the foam covering the fuel tank have repeatedly delayed the shuttle's final launch, originally scheduled for November 1.

Technicians repaired the cracks and reapplied foam insulation on aluminum brackets on the tank last month.

Earlier this month Space Shuttle Program Manager John Shannon told reporters that workers would outfit the cracked tank with sensors and fill it with cryogenic fuel, then watch to see what happens in an effort to understand the glitch.

NASA tweeted Friday that the test was "proceeding well -- there were no leaks from the ground umbilical carrier plate that was repaired."

The tank has been filled with 535,000 gallons of liquid oxygen and hydrogen, NASA said, adding that the "data will take time to review."

The foam cracked while the tank was being filled November 5 for the shuttle's planned launch to the International Space Station.

Discovery is scheduled to deliver a storage module, a science rig and spare parts to the orbiting facility.

The delay means the final launch of Endeavour, which is also scheduled to be the last launch of the space shuttle program, is likely to be delayed until April 1, said Bill Gerstenmaier, associate administrator for space operations.