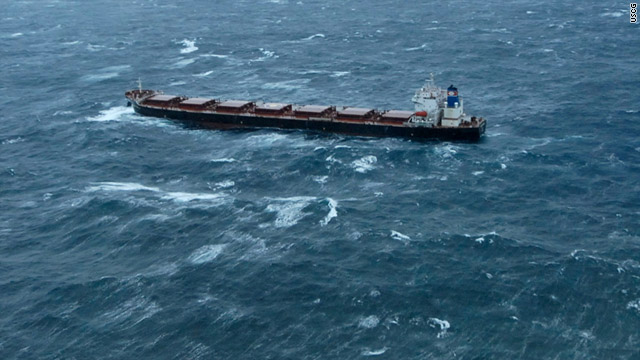 The 783-foot Golden Seas, with a full load of canola seed, has struggled to keep from running aground since Friday.
STORY HIGHLIGHTS
RELATED TOPICS

(CNN) -- Rescuers towing a giant disabled freighter in frigid Alaskan waters were attempting to avoid bad weather on Sunday, a move that will delay its arrival in Dutch Harbor, Alaska, the Coast Guard said.

The Tor Viking II vessel, towing the Golden Seas freighter, had "moved south a little bit" to avoid 20-foot seas and 30-knot winds, Coast Guard Chief Petty Officer Dana Warr said. The Tor Viking II's captain made the decision to loop below the Aleutian Islands, he said. The freighter is not expected to arrive in Dutch Harbor until Tuesday afternoon, he said Sunday.

The 738-foot Golden Seas suffered engine problems Friday morning and was chugging along at only 3 knots (3.5 mph). On Saturday night, the Tor Viking II vessel reached the Golden Seas and began towing it toward Dutch Harbor, a journey of about 275 miles, Warr said.

"Right now, everything is going as planned," Warr said, adding that authorities will remain vigilant until the freighter reaches Dutch Harbor.

The U.S. Coast Guard cutter Alex Haley was expected to meet the two vessels on Sunday morning, according to the Alaska Department of Environmental Conservation.

Warr said Sunday the cutter was "just around the corner" and able to assist should the tow line break -- the worst-case scenario, he said. In addition, the Coast Guard can fly out in helicopters to reconnect the tow, he said. "We have plan B in place in case something happens," he said.

"The safety of the crew is paramount. At the current time they are not in any danger," Jeremy Michels, responsible party incident commander, said in a teleconference Saturday.

The tow operation took about three hours to set up, Warr said Sunday.

The vessel, owned by the Greek company Allseas Marine, was traveling from Vancouver, British Columbia, to the United Arab Emirates.

The towing operation will be challenging because of high seas, including waves of up to 26 feet, officials have said.

The Golden Seas encountered waves as high as 29 feet on Friday, the Coast Guard said.

Helicopters aided the effort to keep the freighter from drifting southeast and running aground on Atka Island, part of the Aleutian Islands in the Bering Sea, before the tow was connected.

Gary Folley of the Alaska Department of Environmental Conservation said the state and Coast Guard are conducting a risk assessment of rescue operations in the region. The study will include a look at possible funding to add more rescue tugs on the islands.