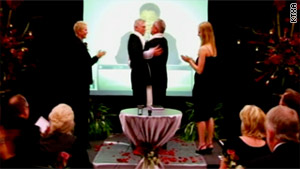 Mark Reed and Dante Walkup had their wedding in Texas, with the officiant beamed in via Skype from Washington.
STORY HIGHLIGHTS
RELATED TOPICS

(CNN) -- Mark Reed and Dante Walkup wanted to marry in their home state of Texas, surrounded by family and friends. But there was a stumbling block: Same-sex marriage isn't legal in the Lone Star State.

So instead, the couple had an officiant who is licensed in Washington, D.C. -- where gay marriage is legal -- witness and certify their union from 1,200 miles away via live online video.

The men thought it worked until the day after Thanksgiving, about seven weeks after the online ceremony, when they received a letter from the D.C. Superior Court informing them that their marriage wasn't official after all.

Reed was outraged, presuming the letter was "motivated by homophobia, politics or both," he said.

"Marriage statutes in the District of Columbia (dating back to 1901) requires marriages to be celebrated within the jurisdictional and territorial boundaries of the city," Marie Robertson, a spokeswoman for the D.C. Superior Court, wrote CNN in an e-mail. "Both the officiant and the parties to the marriage must be physically present at the ceremony performed in the district."

Though video conferencing allows people to interact in new ways, such technology raises tricky questions about what it means to be present in a legal sense. Describing themselves as "accidental activists," Reed and Walkup now find themselves part of the new legal tangle.

The two men began talking about marriage about a year and a half ago, after Reed got in a car accident and landed in the hospital. Walkup rushed to the emergency room to be with his longtime partner.

"The very first question I was asked was, what was my relationship to him?" Walkup recall. "I lied. I said he was my husband, and I wanted to see him immediately."

Over the next few months, the couple began researching laws in the five states and Washington that allowed same-sex marriage. Some, like Iowa, strictly delineated that all parties had to be in the state for the ceremony and marriage certification.

But they were intent on marrying in Texas and felt that the language in Washington's statute was more flexible.

So did Rev. Sheila Alexander Reid. Licensed to marry people in Washington, she appeared on a large screen in front of Reed and Walkup on October 10, guiding them through the ceremony and helping process their paperwork via the video conferencing program Skype.

"We met with our family and friends and had them participate in our commitments to each other," Walkup said of the event. "It feels different -- it feels like you're married now."

Even if the District of Columbia had certified their marriage, Reed and Walkup understood that Texas authorities would not have recognized it. Walkup's attempt to change his name on his driver's license, for instance, was turned down even when he had what he thought was a valid D.C. marriage certificate.

But Reed said the pair still wants to be officially married somewhere, feeling "that ... document would have helped significantly" in cases like hospital visits, sharing benefits and other advantages of married life.

In its letter, the court included another marriage application, so that Reed and Walkup could "correct" the problem and legally wed -- in Washington. The two men said this week that they plan to do so, even as they push forward on the legal front.

"If we determine that we have a strong case to pursue a lawsuit, we will do that," Reed said. "But one thing is for sure: We will eventually get officially married -- legally married -- in Washington, D.C."