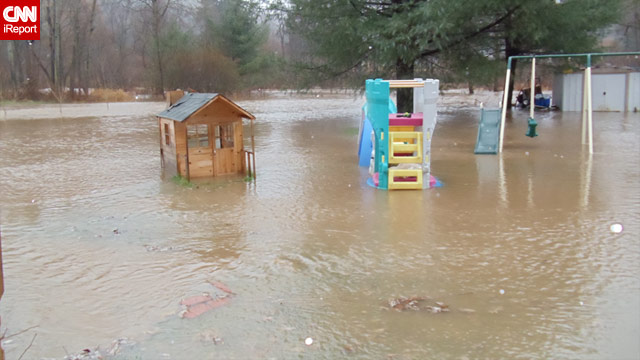 (CNN) -- A strong storm system Wednesday brought rain and winds that shut down the Statue of Liberty and delayed flights for more than four hours at airports in the mid-Atlantic and Northeast.

Flight times were almost back to normal by late Wednesday.

The wind snapped a large lighted Christmas tree at the South Street Seaport a few blocks from the Brooklyn Bridge, CNN New York affiliate WABC reported. No injuries were reported.

The Statue of Liberty was forced to close at 2 p.m. because of inclement weather, the National Park Service said on Twitter. Weather permitting, the venue was expected to reopen Thursday

Heavy rain triggered flooding in some Eastern states a day after the system raked the Southeast.

"The flooding is getting way worse" near Austin, Pennsylvania, said CNN iReporter Marcia, who asked that only her first name be used. "They are closing down roads. Some people have been evacuated. ... This is worse than the '72 flood, from what I am hearing."

Families pick up pieces after storms

The storm system brought flooding and snow to areas around Pittsburgh, Pennsylvania, on Wednesday, slowing commuters and prompting some schools to open late, according to CNN affiliate WPXI.

CNN has confirmed that there is a state of emergency in Butler County, Pennsylvania, until at least Thursday morning because of the flooding due to storms from late Tuesday and Wednesday.

During much of the day, ground stops were in effect for New York's John F. Kennedy and LaGuardia airports because of low clouds and heavy rain, according to CNN Meteorologist Sean Morris.

One person was killed and a second injured Wednesday when high winds caused a tree to fall on a car with two people in it in West Milford, New Jersey, according to the National Weather Service in Upton, New York.

Tracy Gill, another CNN iReporter, awoke to rising waters in Coudersport, Pennsylvania. Gill estimated the water to be about a foot deep and still rising. "I was unable to leave to pick up my daughter from preschool. The road is pretty much gone," Gill said.

On Wednesday, the storm system set its sights on much of the Eastern Seaboard. Severe thunderstorms were possible from the Florida Panhandle north to Maryland, and flash flooding was possible from northern Georgia into Vermont and New Hampshire, according to the National Weather Service.

Also Wednesday, the National Weather Service confirmed that it was a tornado -- packing winds of 130 mph -- that tore through suburban Atlanta, Georgia, on Tuesday, damaging more than 50 homes and a business.

The structures were damaged in Buford, Georgia, in Gwinnett County, by an EF-2 tornado, said Steve Nelson, science and operations officer for the National Weather Service's forecast office in Peachtree City, Georgia.

"It was terrifying at the time," Edwin Pellicia, resident of a hard-hit Buford subdivision, told CNN affiliate WXIA. "Now you're just thankful to be alive. ... Today, you really appreciate the time that you have with family and having your life."

At least 56 homes and one business in the area were damaged by the tornado. Twelve of those homes suffered major damage. There were no reported injuries.

One person, a 54-year-old man, died in a traffic accident in Gwinnett County on Tuesday while the storms were moving through, according to the county's police department. Strong winds associated with the storm apparently caused a tree to break in half and fall on the his vehicle, officials said in a statement.

In Atlanta on Tuesday, the system downed trees and power lines and snarled the afternoon commute, with roads in several areas closed because of flooding.

Video showed damaged roofs and trees in northern Gwinnett County, about 35 miles northeast of downtown Atlanta. A tornado warning had not been issued for the neighborhood where the damage occurred. Footage showed one home missing an exterior corner, with siding and insulation strewn about the area.

"I was on my way home from work, and the parents were calling us to see if the kids were OK. I knew a tornado hit at Gravel Springs [Road]; I didn't know it was going to be our house," resident Erin Birdsong told affiliate WSB.

Rescue crews conducted door-to-door searches to make sure everyone in the area was accounted for. Several families had to find a place to stay overnight, according to WGCL.

Pellicia said the upcoming holiday season will be more meaningful to him because of the experience. "It's going to look different, but it's going to mean a whole lot more," he told WXIA. In addition, several residents expressed gratitude that no one lost their life, adding that homes can be repaired.

Tornadoes during this time of year can be particularly dangerous because they are fast-moving and obscured by rain and darkness, according to Morris.

In Mississippi, state authorities dispatched emergency crews Tuesday to survey the damage after an onslaught of severe weather that injured at least 32 people, damaged property in 10 counties and cut power.

Two were in Yazoo County, one slammed Starkville, and the fourth touched down in Raleigh. An EF-2 twister (on the Enhanced Fujita Tornado Damage Scale) produces wind gusts, estimated by damage assessments, of 110 to 137 mph, according to the National Oceanic and Atmospheric Administration.

A tornado touched down in Yazoo County on Monday night, causing damage to a courthouse in downtown Yazoo City and tossing debris in a wide area, according to an emergency management spokesman.

The twister touched down about 8:05 p.m., according to the National Weather Service's Jackson office.