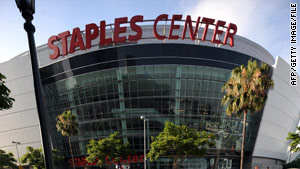 The luxury suite is on the Staples Center's third deck, which has a roughly 50-foot drop, KTLA-TV reports.
STORY HIGHLIGHTS
RELATED TOPICS

Los Angeles, California (CNN) -- A young boy fell to his death from a luxury suite at Los Angeles' Staples Center on Sunday night, according to the Los Angeles Police Department.

The 2-year-old boy fell from the suite around 9:15 p.m. (12:15 a.m. ET), police said in a statement. The boy was transported to the USC Medical Center, where he later died, Sgt. Frank Alvelais told CNN.

The toddler fell a few minutes after the conclusion of a NBA game between the Los Angles Lakers and the Golden State Warriors, CNN affiliate KTLA reported.

After the game, the boy's family and others in his group were taking pictures while still in the luxury suite section of the arena, police said.

The third deck of the Staples Center -- where the luxury suite is located -- has a roughly 50-foot drop, according to KTLA.

Witness said the child was still moving his legs and arms as he was being put on a stretcher, KTLA reported.

Detectives said they are investigating the circumstances surrounding the boy's death.