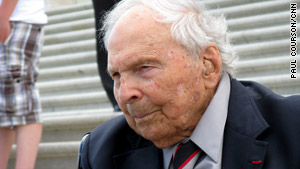 Washington (CNN) -- There is only one living U.S. veteran of World War I: 109-year-old Frank Buckles, who was an Army corporal who drove a troop ambulance in Europe.

On Veterans Day in recent years, Buckles would stop by Arlington National Cemetery to visit the grave of Gen. John "Black Jack" Pershing, the commander of American troops in that conflict.

He would also visit Washington's World War I memorial, a tall marble gazebo on the National Mall. The monument, dedicated in the 1930s, lists the names of men from the District of Columbia who served.

Today, Buckles is pushing a bill naming both the Washington site and one in Kansas City, Missouri, as official national monuments of the conflict. Buckles says he considers it his duty as the last man standing to represent his colleagues.

Nearly a year ago, he testified on Capitol Hill for the legislation.

Although there has been no action on the bill in months, there's a chance the Frank Buckles Memorial Act will be signed in time for him to see his wish come true. On Thursday, National Park Service officials led a tour of the Washington site to highlight renovations now getting under way. A neglected walkway and both a deteriorated dome and marble columns have been undergoing reconstruction and cleaning for the first time in decades.

Broken flagstone that gave Buckles a rough ride when he visited the site in his wheelchair in 2008 is now being dug up and replaced. Overgrown holly trees planted years ago have been removed, providing a clear view for pedestrians who might otherwise miss the memorial entirely.

Buckles has been in declining health over the past few months, according to his family. He planned to spend this Veterans Day resting at his West Virginia farmhouse, a family friend told CNN.