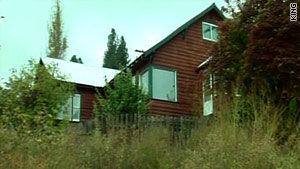 (CNN) -- The Washington state Liquor Control Board on Wednesday banned the sale of alcoholic energy drinks after a group of college students got sick from consuming a drink nicknamed "blackout in a can."

The ban, which takes effect November 18, follows the October hospitalization of nine underage Central Washington University students who said they got sick after drinking "Four Loko," a caffeinated malt liquor. Some of the students also mixed the canned drinks with other alcohol, including vodka, police reported.

Washington state Attorney General Rob McKenna has called for federal food regulators to ban the beverages, which he said "have such high levels of stimulants that people have no idea how inebriated they really are."

But Four Loko's manufacturer, Phusion Projects of Chicago, Illinois, said the drink is "just as safe as any other alcoholic beverage" when used responsibly. The company said it was "extremely disappointed" by the ban, which it said was "based on misguided information and does not address the issue at hand."

"If the true concern was to preserve the public health, safety, and general welfare, this ban would also address caffeinated liquor products, which contain three to four times as much alcohol as our products," Phusion said in a written statement. "Instead, under this ban, these products will remain legal and accessible to the same subset of the population that chose not to consume our products responsibly, sold in stores where existing alcohol laws can continue to be ignored, and abused alongside the same types of alcohols and other illicit substances that contributed to the incident at Central Washington University earlier this year."

The company called the Central Washington University incident "disturbing and unacceptable," but said the liquor board's move does nothing to address the "ongoing challenge" of underage drinking among college students. And it said the board ignored its normal procedures, depriving affected businesses "any opportunity to be heard." In an earlier statement, Phusion said Four Loko has about the same amount of alcohol as wine or some craft beers and roughly the same amount of caffeine as a cup of coffee from the Starbucks chain.

The incident that led to the ban took place in Roslyn, Washington, in early October. Police concluded that none of the students was drugged or given alcohol without their knowledge, according to a school statement, but the findings convinced university President James Gaudino to ban "alcohol energy drinks" from his campus.

"Being able to feel the effects of tiredness, loss of coordination and even passing out or vomiting are the body's defenses against consuming doses of alcohol that will kill you," professor Ken Briggs said last month. "Regardless, once the blood alcohol level reaches a certain level you can drop like a box of rocks."

CNN's Alan Duke and Michael Martinez contributed to this report.