Tony Hayward: BP not prepared for fallout, was on financial brink 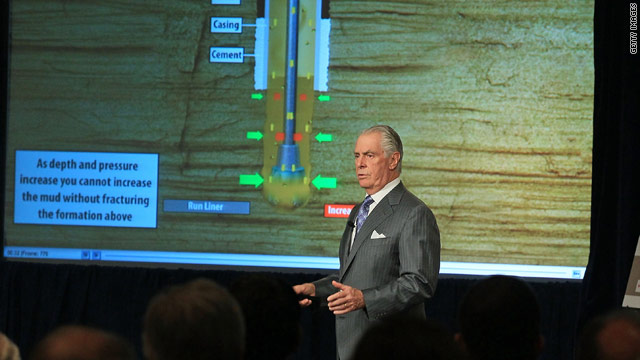 Washington (CNN) -- Its boss the butt of late-night jokes and its conduct the target of President Barack Obama's ire, BP went into a June meeting at the White House with its future at stake.

"The confidence of the markets had been rattled," former BP CEO Tony Hayward said in his first interview since he resigned, indicating how close the company was to collapse.

Oil was still flowing from its well in the Gulf of Mexico and the company was being hit financially on all sides, with its stock price down and demands increasing for it to suspend dividend payments.

Eleven lives had been lost on the Deepwater Horizon rig and Gulf Coast residents were feeling the punch of the disaster.

"These were frightening days," current boss Bob Dudley told the BBC, which aired "BP: $30 Billion Blowout" on Tuesday. "It was a very, very tense period."

BP emerged from the White House with an agreement to spend $20 billion in reparations over four years and for politicians to tone down the anti-BP rhetoric.

Hayward told the BBC the company was "not prepared" for the fallout from the spill and that he understood why he was "demonized and vilified" by the American public.

"It is very difficult to hate a company," said Hayward, conceding BP contingency plans were inadequate. "It's much easier to hate an individual."

Hayward made a series of ill-advised remarks during the crisis, including, "I would like my life back." U.S. politicians and officials castigated him and occasionally referred to the company as "British Petroleum" rather than as "BP," underscoring that a foreign-based company was at fault for the disaster.

"I don't feel like I've been made a scapegoat, I recognized the realities of the world we live in," Hayward told the BBC. "In some senses it comes with the patch and you simply have to take the rough with the smooth."

Hayward said the company can restore the environment and jobs, but not the lives of those who died on the Deepwater Horizon.

"I was and remain devastated, he said. "I feel a real accountability for that."

The BBC program was aired on the second day of U.S. hearings about the Gulf oil spill.

One bad decision after another, failed tests and other shortfalls show that the three companies involved in the disaster need to be overhauled, the co-chairman of the presidential commission investigating the incident said.

"BP, Halliburton, and Transocean are major respected companies operating throughout the Gulf," said William Reilly, former administrator of the Environmental Protection Agency, "and the evidence is that they are in need of top-to-bottom reform."

Referencing his own earlier remarks about "culture of complacency," Reilly said, "all three companies we heard from displayed it," Reilly said.

On Monday, the commission reported that workers aboard the Deepwater Horizon were pushing to complete the well, but no "conscious decision" to cut corners on safety had been discovered.

"Leaders did not take serious risk seriously enough, did not identify risk that proved to be fatal," Graham said Tuesday.

The disaster began April 20 with an explosion aboard the Deepwater Horizon drill rig, which was completing the well for BP at the time of the blast. The 11 killed all died in the blast and fire, which raged for two days before the rig sank, rupturing the well a mile below.

Transocean, the rig's owner, Halliburton, the cement contractor, and BP have pointed fingers at each other since the rig sank. BP was responsible for capping the ruptured well it owned and cleaning up the more than 200 million gallons of oil that spilled. The well was sealed temporarily in mid-July and capped permanently on September 19.

"There seemed to be a compulsion to get this rig completed in that April 19, April 20 time period," Graham said Monday. Reilly also cited a "rush to completion" and called BP and its partners "laggards" in following best practices for drilling.

Tuesday's testimony included discussion on BP's plan to temporarily cap the well before another rig would move in to start collecting oil.

Charlie Williams, well engineering scientist, said his company uses at least three plugs during such a process, as compared to BP's one.

The director of a petroleum research laboratory at Louisiana State University testified that better training and drills could prepare rig workers for disasters.

"I definitely think an increase in training should be considered, particularly with a set of disaster scenarios, if you will," said Darryl Bourgoyne. "I think it would probably be much more effective if [training] drills were regularly conducted along these lines on the rigs that were doing the operations with the crews."

The commission also heard from ExxonMobil about its safety programs. Its executive said the company learned some lessons from the 1989 Exxon Valdez disaster in Alaska and other situations.

"ExxonMobil's goal is not simply to have employees comply with safety procedures. A culture of compliance alone can lead to complacency," said Rex Tillerson, chairman and chief executive officer. "We seek to go beyond compliance, to create a culture in which employees are not only meeting the safety procedures, but they are challenging them so they can be improved where needed."

BP and Halliburton have drawn criticism about flaws in cement that was poured to reinforce the well.

The companies involved each had data," commission chief engineer Richard Sears testified Tuesday. "And if data had been shared differently and if operations had been carried out differently, I believe this disaster could have been prevented."