No prosecution for destruction of CIA tapes, Justice Department says 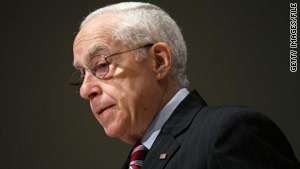 Special prosecutor John Durham has been investigating the circumstances of the destruction of the tapes since he was appointed by then-Attorney General Michael Mukasey in 2008.

"As a result of that investigation, Mr. Durham has concluded that he will not pursue criminal charges for the destruction of the interrogation videotapes," said Matthew Miller, director of the Justice Department Office of Public Affairs.

Durham, federal prosecutor from Connecticut, and his team determined there was not enough evidence to bring an indictment, and time was running out under a statute of limitations, according to a senior Justice official.

Officials have acknowledged the intentional destruction in 2005 of more than 90 videotapes, including some showing images of the use of enhanced interrogation techniques.

A prime target of the investigation was former CIA executive Jose Rodriguez, who approved the destruction because the tapes could have inflamed Muslim sentiments as the release of Abu Ghraib prison photos had done.

An attorney for Rodriguez, Robert Bennett, said he was pleased the Justice Department had decided not to prosecute his client.

"This is the right decision because of the facts and the law. Jose Rodriguez is an American hero, a true patriot who only wanted to protect his people and his country," Bennett said.

Durham's investigation has not concluded. It remains possible that he could bring related charges for obstruction of justice in the case.