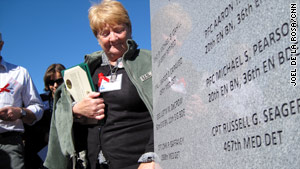 Fort Hood, Texas (CNN) -- A year after a lone gunman went on a deadly shooting rampage inside a soldier processing center at Fort Hood, friends, colleagues and family members of the 13 victims gathered Friday at the U.S. Army base in Texas to pay tribute to their loved ones.

The commemoration of the anniversary of the shootings began with an awards ceremony honoring more than 54 soldiers and civilians whose actions went beyond the call of duty on November 5, 2009.

Among those honored were civilian police officer Sgt. Kimberly Munley, whom authorities credit with taking down suspected shooter Maj. Nidal Hasan and ending the attack, and Capt. John Gaffaney, who also helped subdue the gunman. Gaffaney, 54, was fatally wounded in the shootings, and his award Friday was given posthumously to his widow.

"November 5, 2009, is forever etched in the consciousness of Fort Hood, the Army and the United States," Maj. Gen. Will Grimsley, deputy commanding general at Fort Hood, said to open the day's events. "That day, one year ago today, our home was attacked. Thirteen of our own were killed and dozens more wounded -- not on a distant battlefield, but right here."

Secretary of the Army John McHugh was also on hand to mark the day.

"We gather today as we did then -- a family. The Army family," McHugh said. "And then, like now, we held each other close, wrapping our arms around each other and drawing comfort and strength and knowing ... we remain today stronger as one than we could ever be when standing apart."

A granite memorial was unveiled bearing the names of the 13 fallen and the quotation, "Death leaves a heartache no one can heal. Love leaves a memory that no one can steal."

The memorial, Army Chief of Staff Gen. George Casey said, "honors them together, forever" and will be "located in a small copse of oak trees -- themselves a symbol of strength and courage."

"And while the pain of their loss is still strong a year removed, the memories of their lives and of their service and sacrifice have been a source of strength to those who knew them best," Casey added, speaking on a stage lined with the photos of the 13 victims as well as a lone monument to the fallen soldiers -- a pair of boots, downturned rifle and helmet.

A touching rendition of "The Prayer Song" was also part of the afternoon memorial, evoking strong emotions from those in the audience with the lyrics, "I pray you'll be all right/And watch us where we go/And help us to be wise in times when we don't know."

Friday's events were the start of two days of commemorative activities. On Saturday, the base will host various running races. Participants can either take part in a one-mile run, a 5K or a half-marathon. One of the dozens critically wounded in last year's shootings, Staff. Sgt. Patrick Zeigler, will lead the half-marathon start on a specially designed bicycle, according to Casey.

Mile markers along the half-marathon route will have placards, each including a photo of one of the 13 victims.

Meanwhile, suspected shooter Hasan awaits word on whether he will be face trial in military court, accused of killing 13 people and wounding 32 more. A hearing began last month for the U.S. Army psychiatrist to determine whether he will face court-martial, which could potentially lead to the death penalty.

Hasan was paralyzed from the chest down after civilian police shot him during the rampage. Many of his alleged victims have testified against him at the hearing.

The Article 32 hearing, like a civilian grand jury, will consider the evidence against Hasan and decide whether the case will move forward. Unlike a grand jury, the hearing is open to the public, and both the defense and prosecution can present witnesses and evidence.