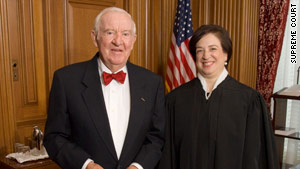 "American Muslims should enjoy the freedom to build their places of worship wherever permitted by local zoning laws," the retired Supreme Court jurist said at a luncheon where he was honored by the National Japanese American Memorial Foundation.

The 90-year-old said his experiences as a veteran of World War II, when the United States was fighting Japan, have given him insight over the years into the need to combat "invidious prejudice."

The proposed Islamic community center and mosque -- now officially dubbed Park 51 -- would be two blocks north of ground zero, where two aircraft hijacked by Muslim extremists crashed into the World Trade Center's twin towers, causing them to collapse. About 3,000 people died, and many city residents say the Islamic facility's location would be inappropriate because feelings from that day nine years ago remain fresh and bitter.

But Stevens said it would be unfair to infer the acts of al Qaeda terrorists as reflecting the views of all Muslims, especially those in the United States.

"Our Constitution protects every one of us from being found guilty of wrongdoing based on the conduct of our associates. Guilt by association is unfair," he said. It would be "profoundly unwise to draw inferences based on a person's membership in any association or group without first learning something about the group."

Our Constitution protects every one of us from being found guilty of wrongdoing based on the conduct of our associates.
--John Paul Stevens, retired U.S. Supreme Court justice
RELATED TOPICS

Stevens retired from the high court in late June after 35 years. He has been active giving speeches and works regularly at the Supreme Court in his chambers, which retired justices are allowed to have.

He said he understands how many people would feel about having a mosque near what has become hallowed ground. But he noted a 1994 visit to Hawaii and the Japanese tourists he encountered at Pearl Harbor, the U.S. Navy base bombed by the Japanese, prompting the U.S. to get involved in World War II.

"Several thoughts flashed through my mind: 'Those people don't really belong here. We won the war; they lost it. We shouldn't allow them to celebrate their attack on Pearl Harbor even if it was one of their greatest victories,' " he said of his tour of the USS Arizona, sunk in the Japanese attacks and now the site of a national park. "I realized that I was drawing inferences about every member of the tourist group that did not necessarily apply to any single one of them. We should never pass judgment on barrels and barrels of apples just because one of them may be rotten.

"I suspect that many New Yorkers who lost friends or relatives as a result of the terrorist attack on the World Trade Center on 9/11 may have reacted to the news that Muslims are planning to erect a mosque or a religious center in the neighborhood much as I reacted to the sight of the Japanese tourists on the Arizona. ... Some of those New Yorkers may have had second thoughts, just as I did at the Arizona."

Stevens served at Pearl Harbor for two and half years during the war. He noted the 10th anniversary of a memorial, erected a few blocks from the Supreme Court, honoring the sacrifice and patriotism of Japanese-Americans, many of whom were forcibly interned at remote prisoner camps during the war.

That monument "conveys the central message that visitors to the Arizona and participants in the debate about the New York mosque should heed," Stevens said. "That message tells us to beware of stereotypical conclusions about groups of people that we don't know very well."

In a speech last month in Nevada, he defended his bitter dissent in a 1989 Supreme Court case that declared flag-burning to be protected speech under the First Amendment. He said that setting it afire was just as dangerous and offensive as burning a Christian cross or desecrating a Quran.

Such symbols, whether in the name of speech or faith, are "entitled to respect."

Now that he is retired, the Chicago native presumably has discretion to talk more candidly about current events and controversial topics than when he was an active justice and deciding a range of appeals.