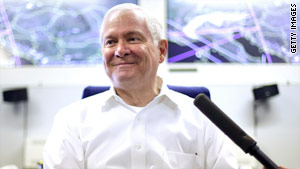 U.S. Defense Secretary Robert Gates has ruled only the secretaries of the Army, Navy and Air Force can discharge under "don't ask, don't tell."
STORY HIGHLIGHTS

Washington (CNN) -- Defense Secretary Robert Gates has raised the level at which gay and lesbian troops can be discharged under the "don't ask, don't tell" policy, ordering that it only be done by the secretaries of the Army, Navy and Air Force, a senior Defense Department attorney said Thursday.

In addition, the senior defense attorney hinted that the Pentagon is preparing for the possibility that the policy banning openly homosexual soldiers could change through the U.S. courts.

"We are planning for multiple scenarios," said the attorney, who spoke on condition of not being identified by name.

The move comes a day after a federal appeals panel temporarily stopped a lower court injunction that prohibited the military from enforcing "don't ask, don't tell." The appellate panel indicated it would fully consider the case as soon as next week, but it was unclear when the legal proceedings involving a court challenge to the policy would be completed.

In a memo written to the heads of all the military services, Gates said his action was taken in direct response to the legal uncertainty that currently exists surrounding "don't ask, don't tell" law and policy, including last week's injunction and the subsequent temporary stay Wednesday by the 9th Circuit panel.

"Effective immediately and until further notice, no military member shall be separated ... without the personal approval of the secretary of the military department concerned, in coordination with the under secretary of Defense for personnel and readiness and the general counsel of the Defense Department. These functions may not be delegated," Gates wrote.

The general counsel of the Defense Department also wrote the heads of each branch, saying, "This latest twist highlights the legally uncertain period in which we now find ourselves with respect to DADT, and the need to further ensure uniformity and care in the enforcement of the law."

The attorney used an example to describe the process, saying the secretary of the Army would present a candidate for discharge to both the under secretary and the Pentagon's top lawyer and say, "Here's the decision I intend to make. What's your view?"

In response, the executive director of the Servicemembers Legal Defense Network, Aubrey Sarvis, said Thursday that the change ordered by Gates could help reduce the threat of being discharged for gay and lesbian soldiers.

"The Pentagon appears to be saying to the court and to service members that it will provide all service members the protections already afforded officers, but with no delegation of that authority: All proposed DADT discharges, regardless of grade and rank, will be reviewed at the highest civilian levels," Sarvis said in a statement. "This can be a major constructive development for gay and lesbian service members."

However, Sarvis said, the move does not end "don't ask, don't tell," and gay and lesbian service members should not reveal their sexuality until a full repeal occurs.

The conservative Family Research Council condemned the federal court injunction against "don't ask, don't tell" and praised the Obama administration for appealing it so that an orderly transition from the policy can occur in the future.

"In the middle of two wars, it's wrong to treat the military as a political yo-yo," said a statement by council President Tony Perkins posted on the group's website.

"It is not desirable to have to send out as many as three of these [directives] in the course of a week and a half. It's unfortunate we have to send out multiple messages," the attorney said. He also said that troops and officials may be confused at this point as to how to interpret the legal proceedings, saying: "Is there potential for service members to get mixed messages because of this? Yes."

Because of the legal wrangling, the "don't ask, don't tell" policy was effectively repealed for eight days before the appellate panel ruling Wednesday night. That period influenced the Pentagon working group studying how a repeal of the policy might affect the military, and how openly gay and lesbian troops would be integrated.

"The eight-day period highlights that if this law changes suddenly like that, the first place we will see its impact is at the recruitment centers," the senior defense attorney said.

The official said the Pentagon witnessed "incidents and issues" as openly gay candidates came to begin the enlistment process, but he did not clarify or give examples. The Pentagon expects the the 9th Circuit Court of Appeals to make a final ruling on the policy sometime in 2011.

Omar Lopez, who was discharged under "don't ask, don't tell" in 2006 with three months left on his five-year contract, walked into a recruiting office in Austin, Texas, last week to try to re-enlist after a federal court judge put an injunction on enforcing the policy.

"I didn't get far enough because they had not heard anything from the DoD or the Pentagon saying that the federal judge has lifted the ban," Lopez said in an interview Thursday with CNN.

When he was rejected by the recruiters, "that's when it struck me there was another slingshot that hit my heart," he said. "But I can't let it hit me emotionally because I have to be strong and we have to keep fighting."

Lopez said he is frustrated with the Obama administration's appeal of the federal court's injunction.

"I'm totally disappointed because when he was running and campaigning, I was pro-Obama and everything like that," Lopez said of Obama's opposition to the policy implemented during the Clinton administration. "Now it's turned into his law because he's pushing against it."

Recruiters were sent instructions on October 15 directing them to accept recruits who said they were gay. That guidance is no longer valid because the appeals panel's ruling means "don't ask, don't tell" is again in force. Pentagon officials seemed unclear what to do about any openly gay recruits whose applications were accepted during the pause in the policy.

Gates and Chairman of the Joint Chiefs Adm. Mike Mullen have both said they prefer "don't ask, don't tell" be repealed through an act of Congress, not the courts. Legislation that would repeal the policy after a military review to be completed in December and approval from the president, Defense secretary and Joint Chiefs chairman has cleared the House and is awaiting Senate action.