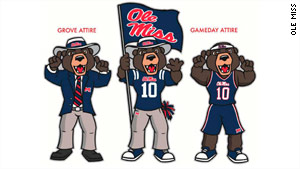 Rebel Black Bear was named as the new mascot for the University of Mississippi.
STORY HIGHLIGHTS
RELATED TOPICS

(CNN) -- Seven years after the sidelining of Colonel Reb, the goateed planter who conjured images of the Old South, the University of Mississippi has a new mascot to do antics for children, visit the sick in hospitals and, yes, cheer on the Red and Blue at fall football games.

Ole Miss on Thursday announced that Rebel Black Bear had outpolled other contenders to earn the honors, beginning in 2011.

Nobel Prize-winning novelist William Faulkner, whose home still stands near the campus in Oxford, Mississippi, wrote a short story titled "The Bear." In it, Old Ben stands as a symbol of pride, strength and toughness.

Extensive polling resulted in the bear defeating the Rebel Land Shark and Hotty Toddy, based on a cheer exchanged between Ole Miss fans, the mascot selection committee announced Thursday. Some Mississippi students had launched a campaign to put Admiral Ackbar from "Star Wars" on the ballot, but it fell short.

About 13,000 people participated in each of two polls on the issue.

The selection puts a symbolic end to Colonel Reb, who enjoyed lingering popularity among many Ole Miss fans. The university for years has distanced itself from association with symbols of the Confederacy. In 1997, it effectively excluded presence of Confederate flags at athletic events by not allowing any banners to be flown from a stick.

"While we might not all agree with the [student] committee's selection, I am confident that we will come together and continue to strongly support the Ole Miss Rebels," alumni association President Charles Clark said. "I know that my love of Ole Miss is as strong as ever, and that I will be in Tuscaloosa on Saturday night cheering loudly for our Rebels."

The Rebels will be on the road Saturday playing the Alabama Crimson Tide.

It's now up Michael Thompson to have the mascot ready to compete against the likes of South Carolina's garnet rooster, Cocky, Auburn's striped tiger, Aubie, and the Georgia's muscle-bound Harry Dawg.

"I was given the black bear and told 'make it happen'," said Thompson, senior associate athletics director for communications and marketing.

The school will work with a costume maker, recruit people who will wear the clothing and, perhaps most importantly, develop the creature's persona.

"I want it to be exactly right," said Thompson, who has been one the job a couple months.

The cursive "Ole Miss" script on T-shirts and other items have been the school's main marketing tool.

"The script is the brand," said Thompson, who believes the mascot will reflect old traditions and, ideally, create new ones.

To that end, Rebel Black Bear will wear a sports jacket, tie and hat to gatherings at the Grove, the legendary game-day tailgating area and meeting place in Oxford. "The Grove is such an integral part of our tradition," Thompson said.

Rebel Black Bear likely will wear a T-shirt and "bring competitive energy to the game," Thompson said, adding mascots by necessity have to have a look and expression suitable for all occasions.

The university has done a good job of positioning its sports brands to get away from Old South stereotypes, Thompson told CNN. He knows Rebel Black Bear, at least initially, won't be welcomed by all.

"No doubt there will be bumps in the road and there always will be critics. Some say if they can't have Colonel Reb they wouldn't want a mascot at all."

But, he says, the school has an opportunity to attract new fans.

"It's what we do with the mascot that is important," Thompson said. "How it interacts with children, who are the future of the University of Mississippi."

The Colonel Reb Foundation tried in vain to get the old mascot, who was created before World War II, on the ballot. A commenter on its Facebook page Thursday lamented the new choice with the message, "The Bad News Bears -- Beware the Curse of the Colonel!"

The university announced in March that Colonel Reb merchandise was being phased out, and licensed sales were concluded by late summer.

"Because Colonel Reb is a mark we wish to own as university property to prevent its inappropriate use by others and to avoid confusing consumers and Ole Miss supporters, we are going to reclassify the mark as "historical" and add it to our college 'vault,'" it stated.

Like just about everything else, Colonel Reb lives on eBay, in the form of phone covers, key chains and even a rubber duck, but the university does not profit from such sales.