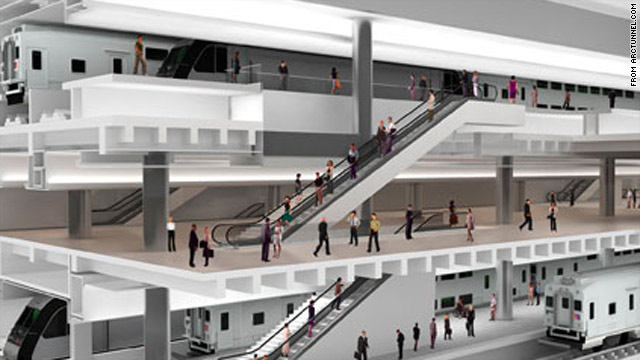 This is an artist's rendering of a new New York Penn Station expansion cavern.
STORY HIGHLIGHTS

The Access to the Region's Center project -- a tunnel connecting New Jersey and New York City, along with an expansion of New York's Penn Station -- would have created 6,000 jobs and taken 22,000 vehicles off the highway. But Christie terminated the project, citing projected cost overruns.

"The fact that the ARC project is not financially viable and is expected to dramatically exceed its current budget remains unchanged," Christie said in a statement after his meeting with Transportation Secretary Ray LaHood. "However, this afternoon, Secretary LaHood presented several options to potentially salvage a trans-Hudson tunnel project.

"At the secretary's request, I've agreed to have executive director of New Jersey Transit Jim Weinstein and members from his team work with U.S. Department of Transportation staff to study those options over the next two weeks."

But Thomas Wright, the head of the Regional Plan Association, said Christie's decision "is really going to take a hit on New Jersey's economic growth." He said the $5 billion estimate for overruns that Christie cited is overstated, with the actual number being closer to $1 billion.

The Port Authority and the Federal Transit Administration each put up $3 billion for the project, with the state of New Jersey adding in $2.7 billion. Part of the federal portion was to be funded by federal stimulus money.