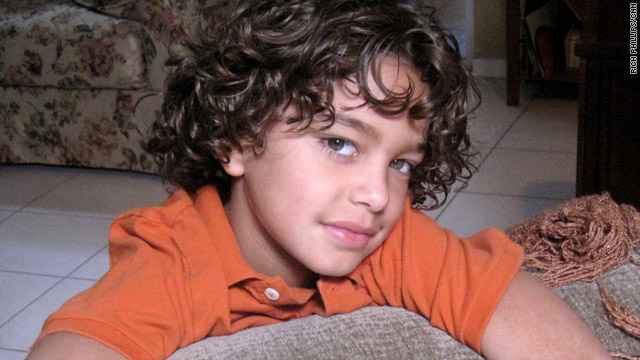 Miramar, Florida (CNN) -- It's quite clear. No guns may be brought to school. Period. It's the law.

So, when Samuel Burgos brought a gun to school last November in Broward County, Florida, the zero tolerance policy kicked in, and Samuel was suspended and then expelled.

Well, here's more. The gun wasn't real. It was a toy gun that never left his book bag. And Samuel -- he was 7 years old at the time.

"No child should be disciplined in this manner," said Magdiel Burgos, Samuel's father. "He made an honest mistake, OK. And he's paying dear life for it, and it just isn't fair."

Samuel, now 8, has been out of school for almost a year. His parents have home-schooled him since he was expelled for bringing a clear plastic, spring-action toy gun to school, which fired plastic beads.

"He has been deprived of an education. My son made a mistake, and they kept him out a year," said Samuel's mother, Karen Burgos.

And it may be longer than that before Samuel is permitted to rejoin his classmates. A hearing will be held this month as his family fights his expulsion. Because the school board's order has not yet been finalized, his punishment could be extended into next year.

"I miss my friends," Samuel said.

Samuel spends his days playing baseball and practicing his studies with his parents. He should be in third grade now, but he's already missed most of second grade and may find himself two years behind by the time this matter is resolved.

In an interview with CNN correspondent John Zarrella, Samuel said that he was playing "army" with his friends one weekend, and he decided to hide the toy gun from his brother, so he placed it in his school bag. He went to school on Monday and said that he forgot he had the toy with him.

Samuel told one of his friends the gun was there but said he never took it out.

When the toy gun was discovered, according to school board records, the principal of Pembroke Pines Charter Elementary School West determined the gun to be a toy, but she felt compelled to report the incident to the school board. The school board classified the toy gun as a weapon because it fired a projectile device. The punishment: mandatory expulsion.

According to school records, school district Superintendent James Notter recommended the boy be expelled. Samuel was not charged criminally.

Notter did not consent to CNN's request for an interview. However, a school board spokeswoman e-mailed this statement to CNN.

"A hearing officer ruled in favor of the School Board of Broward County to uphold [its] recommendation of expulsion. ... Students have the right to personal privacy and the District is exercising responsibility of respecting this right."

Zero tolerance policies, such as this one in Florida, exist in some form in all 50 states, according to the Education Commission of the States.

In the post-Columbine world, schools have taken a hard line in increasing safety by increasing punishments. But the laws are constantly evolving, according to experts, so that the less serious, often petty cases of misconduct are not handled the same as the serious ones.

In Louisiana, a child who brings a knife to school with a blade 2 inches or longer will be expelled, except when the student is under 11 in pre-kindergarten through fifth grade, according to the Education Commission of the States.

And, in Broward County, where Samuel lives, school officials have amended their policies this school year and require mandatory expulsion only for possession of a firearm.

But it comes a year too late for Samuel. One expert said there's been a definite error of judgment, and now Samuel has missed a large part of two school years.

"This is a 7-year-old child," said Kathy Christie of the Education Commission of the States. "This is a case where it was not brandished. It's a plastic gun. ... It just seems a long time to penalize a young man like that, a long time to take him out of that educational experience."

During their son's expulsion, Samuel's parents were offered the chance to send their son to an alternative school. The school, for "at risk" kids, has about 200 students in kindergarten through 12th grade.

"We said this is not an option, this is unacceptable," Samuel's father said. "I cannot, as a concerned parent, send my child, to a correctional school at 7 years old, who committed a mistake."

The Burgoses worry that this blemish on Samuel's permanent record will follow him, so the family is challenging the school board's ruling. Samuel could also be penalized for not attending the alternative school, according to his attorney.

"If he applies to certain colleges and universities, they too will be aware of an expulsion that happened in second grade," said Burgos family attorney, Alfreda Coward. "They'll know that he was expelled from school for having a class 'A' weapon, and the No. 1 item on that is a firearm."

For now, Samuel spends his days at home, but he said he misses going to school and doing his homework.

While that may be hard to believe, his mother works with him and helps him with his lessons each day. But is she a good teacher?