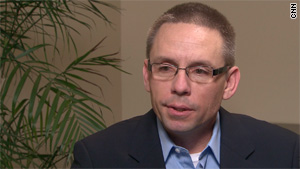 Christopher Winfield, the father of Spc. Adam Winfield, says he called the Army about the killings, but got no response.
STORY HIGHLIGHTS

(CNN) -- A U.S. soldier who blew the whistle on his fellow soldiers' links to the killing of civilians in Afghanistan -- and who himself is accused of one slaying --has been moved to solitary confinement for his safety, a source said.

Spc. Adam Winfield, 21, told Army investigators that he alerted his father to the civilian killings early this year and told him that he feared for his own life, according to an interrogation tape obtained by CNN. His father tried and failed to get the military to intervene, Winfield's attorney, Eric Montalvo, said.

Winfield now is held in a military facility at Joint Base Lewis-McChord in Washington along with other soldiers he said instigated the killings. Some of those soldiers are facing charges in connection with three slayings of civilians, and Winfield would be a key part of any case against them.

Winfield contacted his father about the serial killing ring inside his Stryker Brigade squad, and his father, Christopher Winfield, telephoned the Army but with little result, Montalvo said. The father's phone calls, from the family's home in Cape Coral, Florida, and the failure of the Army to take swift action to intervene are the focus of a separate military investigation, an Army spokesman said.

A person familiar with the case against Winfield and the other soldiers said Sunday that Winfield had been moved to solitary confinement amidst concerns about his safety. But that person insisted on anonymity because of the sensitivity of the issue.

Authorities at Lewis-McChord, Winfield's home base, would not comment on any questions about Winfield. But a spokeswoman said that an investigation is underway, although she would not identify who was involved.

"We will not comment on measures taken to ensure this individual's safety," Maj. Kathleen Turner, a public affairs officer for Lewis-McChord, said. "The U.S. Army CID is investigating allegations that a threat was made to one of the defendants; however, we are not releasing any further information associated with these allegations."

The Army would provide no details of how Winfield and the other defendants are being housed or whether they have been allowed to communicate amongst themselves.

Winfield, Cpl. Jeremy Morlock of Wasilla, Alaska; Pfc. Andrew Holmes of Boise, Idaho; Spc. Michael Wagnon, of Las Vegas, Nevada; and platoon leader Staff Sgt. Calvin Gibbs of Billings, Montana, are charged with premeditated murder charges in the killings of three Afghan civilians between January and May of this year. Seven other soldiers face charges ranging from conspiracy and interfering in a military investigation to drug use, specifically smoking hashish, while in Afghanistan.

Military reports say that Gibbs kept track of the killed with skull tattoos and collected body parts as souvenirs.