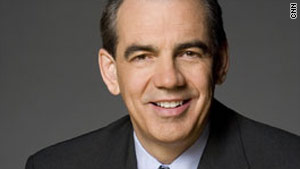 Walton also said he would hire a managing editor to "help leverage our newsgathering resources across multiple platforms."

"Ken is a rarity -- a working journalist who is an even better news executive," wrote Walton in a memo to staff. "Ken has launched, made profitable and turned around businesses for our news organization, Turner Broadcasting and Time Warner literally around the world."

Jautz, who joined CNN in 1989 as a bureau chief in Germany, has held a wide variety of jobs at the company, including executive vice president in charge of CNN's business news operations. During a stint with Turner Broadcasting Europe, he helped launch channels in several European markets. Most recently, Jautz has presided over the revamp and rebranding of the HLN channel, introducing signature programs such as Nancy Grace, Joy Behar, ShowBiz Tonight, Issues with Jane Velez Mitchell and Morning Express with Robin Meade. The new evening line-up doubled the network's prime-time ratings.

"I look forward to working with CNN's many fine journalists and launching two new shows that I think will make our prime-time lineup more engaging and lively," Jautz said, "and will continue CNN's strategy of delivering smart, informative news and analysis from across the political spectrum."

Safon takes over HLN after heading CNN's marketing for the last eight years, winning wide industry accolades for his marketing campaign for CNN and CNN=Politics. Before joining CNN, Safon oversaw marketing for one of CNN's sister channels, TNT.

"Scot is one of the most creative and passionate executives at Turner Broadcasting," said Walton.

The memo sent to staff said Jonathan Klein is leaving CNN. During Klein's six years at CNN/US, the network won many awards for its aggressive coverage, including Hurricane Katrina, the South Asia tsunami, the 2008 U.S. elections and the devastating Haiti earthquake.

"Jon has made important contributions to the CNN story, and he leaves with our respect and friendship, and with my sincere thanks," Walton wrote to staff.

Walton said that a search is under way for the new position of company-wide managing editor. The assignment for the new editor, Walton wrote to staff, is to generate "the kind of front-page reporting and analysis that captures a news event, translates its meaning and shapes the dialogue about the story."

Phil Kent, CEO of Turner Broadcasting System, the parent company of CNN, also highlighted the role of the new managing editor position, saying it would "build on the network's unique strengths in journalism and on CNN's quality editorial voice across all platforms."

"Jim Walton is a world-class leader, and I'm in full support of his newly announced organizational structure and leadership team," Kent said. "I believe these changes will position CNN/U.S. and HLN for future growth and success."