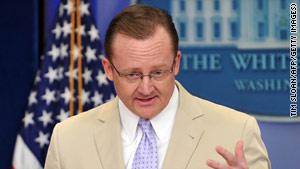 Washington (CNN) -- The Obama administration is objecting to a request for an immediate halt to the military's "don't ask, don't tell" policy after a federal court ruled that the policy barring gays from serving openly is unconstitutional.

The government calls a worldwide cessation of the policy "untenable," saying an injunction should be limited to the plaintiff, the gay political group Log Cabin Republicans, and members who it claims are gays and lesbians serving in the military.

The government also states that an immediate termination of the 17-year-old policy may pose a threat to the military.

"A court should not compel the Executive to implement an immediate cessation...particularly at a time when the military is engaged in combat operations and other demanding military activities around the globe," the government said in a court filing.

Thursday was the government's deadline to respond to an injunction proposed by the group that filed the original suit.

"We are not surprised by this but we are extremely disappointed with the Obama administration. Many times on the campaign trail, President Obama said he would support the repeal of 'don't ask, don't tell.' Now that it's time to step up to the plate, he isn't even in the ballpark," said Clarke Cooper, executive director of Log Cabin Republicans.

White House press secretary Robert Gibbs said in a statement, "This filing in no way diminishes the President's firm commitment to achieve a legislative repeal of DADT -- indeed, it clearly shows why Congress must act to end this misguided policy."

Gibbs added, "the Secretary of Defense and the Chairman of the Joint Chiefs have both testified in support of repeal. And the Department of Defense continues to work on a plan on how to implement repeal."

Judge Phillips, a 1999 Clinton appointee, ruled earlier this month in California, that the "don't ask, don't tell" law violates the First and Fifth Amendments to the Constitution. Phillips will now rule on the injunction but a specific timeline is not set.

The response comes just two days after a failed attempt by Senate Democrats to pass a defense spending bill that included a repeal of the "don't ask, don't tell" policy.

On Friday a federal court judge is expected to rule on a closely watched case in Washington state, where an Air Force major was dismissed for being a homosexual.

Maj. Margaret Witt, a flight nurse with 20 years of service, was honorably discharged in July 2007 on the grounds that she had a six-year relationship with another woman, a civilian.

The lawsuit seeks to reverse the Air Force decision to discharge Witt.