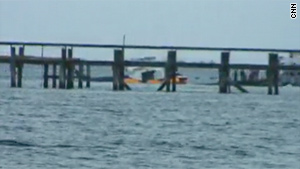 All five people aboard the NYPD helicopter on Wednesday got out safely.
STORY HIGHLIGHTS

Six people were aboard the aircraft. All got out safely but all six suffered minor back and neck injuries, according to Browne.

"They were flying during our coverage of the presidential visit and were on standby for that and the United Nations General Assembly," said Browne, referring to President Barack Obama, in New York to speak at the United Nations.

Browne says the crew was coming in for a landing at the time of the crash. "They had some time and they were coming in to top off their fuel. They were not out of fuel," he said.

"About 30 to 35 yards from the (landing) field, there was some kind of mechanical difficulty which caused them to make an emergency landing on the water, " Browne said, adding that inflatable pontoons on the aircraft deployed around its skids.

Police and private boats quickly approached the chopper. "They (the crew) stepped off the chopper onto the boats. They were never in the water, " Browne said.

Browne says there was a pilot and co-pilot, a crew chief, a crew chief in training, and two scuba divers on the helicopter.

Police Commissioner Ray Kelly met with the crew at a local hospital. None of the crew was admitted to Lutheran Medical Center.

The National Transportation Safety Board will investigate the incident.