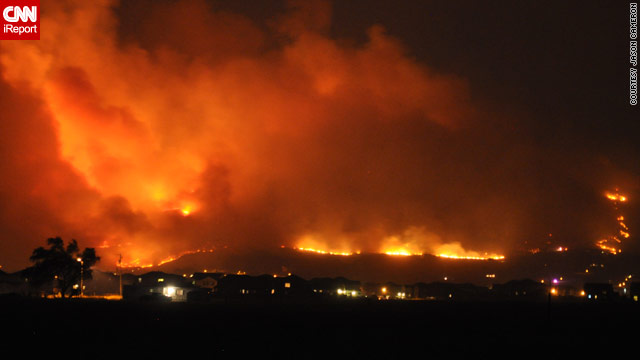 Editor's Note: Are wildfires blazing near you? Share photos and video with CNN iReport, but please stay safe.

About 400 personnel were in Herriman, Utah, to battle the Machine Gun fire, as the blaze has been dubbed, said fire spokesman Marshall Thompson. Equipment on scene included 35 fire engines, a total of five air tankers and four Black Hawk helicopters, he said.

But high winds may hinder efforts to fight the flames. The National Weather Service has issued a red-flag warning for winds that could gust up to 45 mph, Thompson said.

The fire has destroyed three homes, and it caused significant damage to a fourth, said Nicole Martin, spokeswoman for Herriman city. Officials said on Monday the flames had crept to within 30 feet of some residences.

About 450 homes remained evacuated, down from 1,600, said Chief Mike Jensen of the Unified Fire Authority. The Red Cross was assisting families, Martin said.

Members of the public were asked not to come to the scene unless there is an urgent need, as people must be escorted in the area, authorities said.

Thompson said the blaze has burned 4,346 acres, significantly less than the 10,000 acres the fire's footprint was estimated to be on Monday.

Authorities expressed optimism about firefighting efforts Monday, but warned that weather conditions could cause a resurgence of fire activity.

The fire was sparked Sunday by ammunition fired by Utah National Guardsmen at nearby Camp Williams. National Guard spokesman Lt. Col. Hank McIntyre acknowledged Tuesday that "we made some mistakes," and said steps are being taken to hold those responsible accountable. About 120 National Guardsmen are helping fight the fire, he said, and the Guard provided the helicopters being used.

McIntyre said earlier the on-base firefighters thought they had extinguished the brush fire started during the training exercise, but then winds resuscitated the flames.

The blaze marched north through an artillery impact area containing some potentially unexploded ordnance that, if heated, could explode, so it was too risky for the firefighters to chase the flames into that area, he said.