Medal of Honor to go to Afghan vet killed in 2008 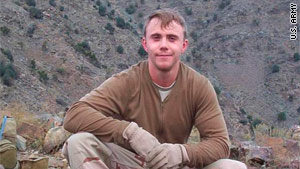 Miller will receive the rare honor posthumously for displaying "immeasurable courage and uncommon valor -- eventually sacrificing his own life to save the lives of his teammates and 15 Afghanistan National Army soldiers," according to a White House statement.

Miller -- born in Harrisburg, Pennsylvania, in 1983 -- enlisted in the Army in August 2003 as a Special Forces candidate. He became a Green Beret in 2005 and was based at Fort Bragg in North Carolina.

The White House announced last week that Obama also intends to award the Medal of Honor to Air Force Chief Master Sgt. Richard Etchberger for his valor in saving the lives of three wounded comrades at a then-secret base in Laos in 1968.

The ceremony for Etchberger is scheduled for September 21 at the White House.

Fewer than 3,500 Medals of Honor have been awarded since the medal was established during the Civil War.