Fire out, no sheen visible at Gulf oil platform 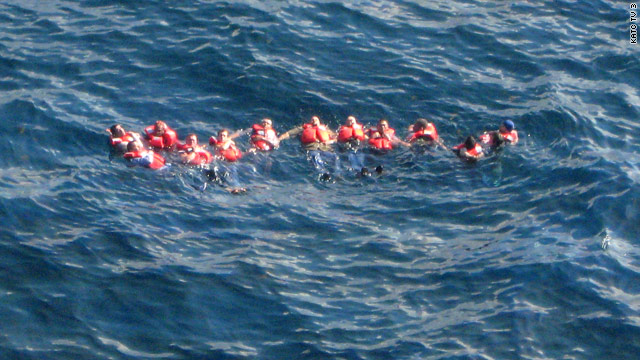 (CNN) -- A fire on a well connected to an oil and gas production platform in the Gulf of Mexico is out and there is no indication of an oil sheen, the U.S. Coast Guard said Thursday.

There were no serious injuries among the platform's rescued 13 crew members, who were wearing survival suits when they were plucked out of the water. They were being evaluated at Terrebone General Hospital, officials said.

Despite earlier reports, there is no evidence of an oil sheen, said U.S. Coast Guard Capt. Peter Troedsson, adding there were no visible leaks.

"We continue to investigate and to monitor that situation," he said at a news conference.

The vessel, the Vermilion Block 380, was engulfed in flames Thursday morning about 100 miles off the central coast of Louisiana. The fire forced its crew into the water. Louisiana Gov. Bobby Jindal said the crew was doing maintenance when fire broke out.

Jindal said the men he spoke to were in good spirits and one was being released to go home for his son's birthday. "What's important is there are no injuries, no loss of life," Jindal said.

The cause of the fire is not yet known, officials said.

Mariner Energy, which owns the platform, said that the fire was not sparked by an explosion. It started at one of the platform's seven active wells after a safety shutoff occurred, the company said.

David Reed, a paramedic on board a nearby oil rig, said he suddenly saw "a bunch of smoke" from the direction of the Vermilion platform, and radios in his rig's control room started "lighting up like a Christmas tree" soon after.

The Coast Guard deployed five helicopters from New Orleans, two from Houston, Texas, and a fixed-wing aircraft from Mobile, Alabama, as well as patrol boats and cutters to the scene.

"Automated shutoff equipment on the platform safely turned off the flow of oil and gas from the platform's seven producing wells before the fire occurred and the crew evacuated," Mariner Energy said in a statement.

Such safety equipment did not kick in on the drilling rig Deepwater Horizon, which burned and sank in April, causing a major oil spill. The blowout preventer malfunctioned.

Although the Vermilion and Deepwater Horizon had different missions, and the former was in relatively shallow water, the incident brought quick reaction.

"This explosion highlights the significant risks associated with offshore drilling, and that much is left to be done to keep America's workers and waters safe from those risks," said Rep. Edward J. Markey, D-Massachusett.

First reports indicated the incident was an explosion. It turned out to be a fire, officials said.

The House Committee on Energy and Commerce sent a letter to Mariner Energy, requested information for a September 10 briefing.

But the Shallow Water Energy Security Solution, an industry group, cautioned against a rush to judgment.

The incident comes nearly five months after the Deepwater Horizon exploded, killing 11 people and causing one of the worst environmental disasters in U.S. history. That oil rig, contracted by BP, had 126 workers. It burned for three days before finally sinking.

Thursday's incident took place aboard a production platform, which is built after a well is drilled and remains in place for years. Oil rigs drill the wells. The platforms pump pressure down the hole to keep the well flowing, and sometimes collect the oil or gas, or both.

U.S. agencies and BP capped the ruptured Deepwater Horizon well July 15, stopping the flow of oil into the Gulf. The effects of the huge spill could hurt the region for years.

The Obama administration tried to impose a six-month moratorium on deepwater drilling in the wake of the explosion on the Deepwater Horizon in April, but the ban is in legal limbo.

A group of companies that provide boats and equipment to the deepwater drilling industry sued to overturn the ban and won in June. The government tried again in July, imposing a new moratorium and asking for the suit to be thrown out. A federal judge refused this week to dismiss it.

The Vermilion platform did not violate the moratorium, said Melissa Schwartz, spokeswoman for the Bureau of Ocean Energy Management, Regulation and Enforcement, which replaced the Minerals Management Service.

"This was an oil and gas production platform in approximately 340 feet of water, 102 miles offshore Louisiana (80 nautical miles)," she said. "This platform was authorized to produce oil and gas at this water depth. The current suspension involves drilling rigs in water depths greater than 500 feet," she said.

A January inspection of the Vermilion showed three incidents of non-compliance: an expired first-aid kit, inadequate perimeter protection on the heliport and "deteriorated safety litter," according to the Bureau of Ocean Energy Management, Regulation and Enforcement.

Mariner Energy describes itself as one of the leading independent oil and gas exploration and production companies in the Gulf of Mexico. The company said it had interests in about 350 federal offshore leases last year, with more than 110 of the 350 in development. The company has about 300 employees. Its most recent quarterly net income was $1.7 million.

The company is in the process of a planned merger with a larger company, Apache Corp. The merger is about four to six weeks away from completion, an Apache spokesman said.