Cap is off BP's ruptured well 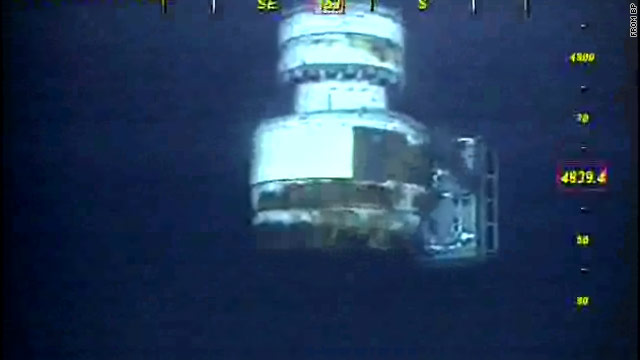 Crews have begun removing the blowout preventer on BP's ruptured well in the Gulf.
STORY HIGHLIGHTS

LIVE: Click here for an underwater view of BP's work.

The operation was the first step in removing the blowout preventer, said BP spokeswoman Jessie Baker. That device failed spectacularly in April, triggering a deadly explosion and oil spill.

Officials planned to replace the blowout preventer with a new one, a major step toward a final fix.

The cap removal was "an important step in the process to remove and preserve the damaged BOP [blowout preventer]," said retired Coast Guard Adm. Thad Allen, the government's point man on the oil disaster. He said work on removing the damaged blowout preventer was expected to commence Thursday night.

On Thursday evening, BP said that a vessel is "is preparing to remove the Horizon BOP" and that another vessel was in the area with a new blowout preventer.

Before Thursday, the effort to permanently seal the ruptured oil well had stalled because of turbulent seas. The operation was delayed last week as engineers tried to fish out pieces of drill pipe stuck inside the blowout preventer.

Removal of the device needs to be done carefully, officials have said, because the blowout preventer may hold valuable forensic evidence as to why it failed April 20, triggering the explosion that killed 11 rig workers and caused the massive oil disaster.

Allen said teams are working closely with joint investigation groups, engineers, scientists and the Department of Justice to ensure the machinery is handled correctly.

The well has been capped since July 15, stopping the flow of oil.