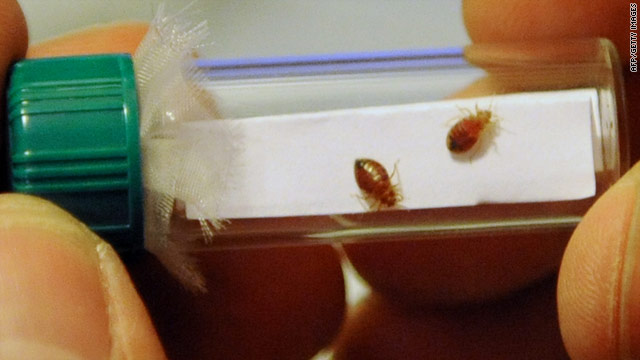 Bedbugs generally live within 20 feet of their hosts and avoid light. You can find them behind headboards and under baseboards.
STORY HIGHLIGHTS
RELATED TOPICS

New York (CNN) -- Facing a sharp increase in bedbug cases, New York became the latest state Monday to require landlords to disclose an apartment building's bedbug infestation history within the previous year to potential tenants, according to a release from New York State Assemblywoman Linda B. Rosenthal, who sponsored the bill.

"Nothing is more horrifying than signing a lease after a lengthy apartment search only to discover that your new apartment is bedbug-infested," Rosenthal said in the statement.

"By requiring landlords to disclose infestations before the lease is signed, people will have a means of guarding themselves against exposure to this plague."

New York is the second state after Maine to adopt such a measure, commonly referred to as a "right-to-know" law, according to Missy Henriksen of the National Pest Management Association, which researches and tracks bedbug trends around the country.

New Jersey has similar legislation pending, according to Henriksen.

"We actually expect an avalanche of right-to-know legislation introduced," she said.

According to the New York City Department of Housing Preservation and Development, it issued 4,811 violation notices to residential landlords for bedbug infestations in 2009, compared with 82 in the 2003-2004 fiscal year. For the first half of 2010, 1,976 bedbug violation notices have been written.

However, such statistics represent only a fraction of bedbug cases in the city, as they come almost exclusively from buildings in the rental market.

Owners of bedbug-infested residences are less likely to call 311, the city's nonemergency hot line, which then notifies the Housing Preservation Department.

Last year, the federal Environmental Protection Agency sponsored a bedbug conference in Arlington, Virginia. Speaking to 230 academics, agency employees and exterminators, Dale Kemery, an agency spokesman, said the incidence of infestation in the United States has tripled since 2005.