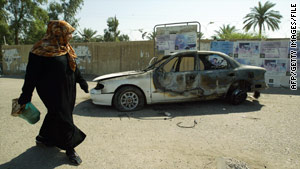 Washington (CNN) -- Xe, the private security firm once known as Blackwater, has reached a $42 million settlement with the U.S. State Department over alleged export violations, a State Department official said.

Darby Holladay, a State Department duty officer, said the civil settlement was reached Wednesday for 288 violations between 2003 and 2009, when the company personnel were guarding U.S. staff overseas.

They involve the "unauthorized export" of defense articles and services to "foreign end-users in multiple countries" and "false statements and misrepresentation or omission of material facts in information provided to the department."

Also, Holladay said, there were violations "of provisos or limitations on export licenses."

But the violations, he said, "did not involve sensitive technologies or cause known harm to U.S. national security."

Xe is pleased with the settlement, which will allow it to continue to get government contracts.

"Most violations occurred in training programs for U.S. or allied governments. The vast majority of the exports were eventually authorized" and that "most of these violations were committed when the company was undergoing rapid growth."

She said that in reaching the resolution, "a number of significant steps" have been made "to remedy the situation," including the replacement of senior management.

In October 2008, Xe established an independent committee to oversee its compliance procedures.

Blackwater's actions stoked controversy in Iraq and Afghanistan. An incident involving its personnel in 2007 left 17 Iraqi civilians dead in Baghdad.

Blackwater lost its contract to guard U.S. staff in Iraq there after Iraq's government refused to renew its operating license.

The company changed its name to Xe, and continues to receive multimillion-dollar contracts in Afghanistan. However, Afghan President Hamid Karzai is in the process of disbanding all private security firms in his country.

CNN's Joe Sterling and Scott Spoerry contributed to this report.