The man who taped baseball's 'shot heard 'round the world' 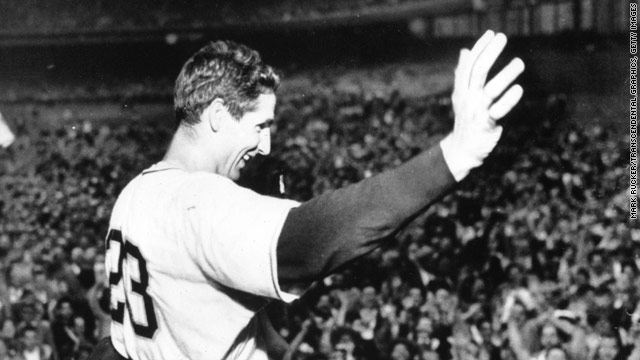 Bobby Thomson waves to the cheering crowd after his game- and pennant-winning home run.
STORY HIGHLIGHTS

Editor's Note: Steve Goldberg is a senior producer at CNN.com.

Atlanta, Georgia (CNN) -- When I was a little boy, my dad and I would sit on the floor next to his old reel-to-reel tape deck, taking turns talking into it and playing our voices back -- the same reel-to-reel he unwittingly used to gain his 15 minutes of fame.

It was October 3, 1951, when Larry Goldberg, a 26-year-old travel agent living with his parents in Brooklyn, set up the deck next to a radio before setting off to work in Manhattan.

He asked his mom to record the 9th inning of the third game of the Brooklyn Dodgers-New York Giants playoffs.

My dad's reward was a tape cartridge, $100 and access to box seats at the Polo Grounds the next season -- a pittance for which my mom often needled him.

Those memories came flooding back this week when I heard the news that Thomson had died at his Savannah, Georgia, home at age 86.

Thomson's "Shot Heard 'Round The World" was heard often at our home, each time I asked my dad to tell me once more how he saved the call. He kept the original tape safely boxed up, instead playing one of the Chesterfield records of the call that Hodges' sponsor pressed as gifts to its dealers. 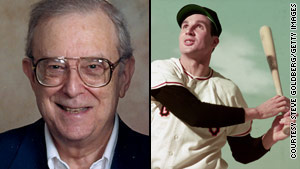 For a long time, no one but a handful of friends and family knew the real story of my dad's role in helping immortalize a bit of baseball history.

Then, on the 50th anniversary of the game, the New York Times ran an interview with Dad. His local paper, the Atlanta Journal-Constitution, did a similar story. Accounts of his recording later appeared in books such as "The Golden Voices of Baseball" and Joshua Prager's "The Echoing Green." Don DeLillo even captured the event in his 1997 novel, "Underworld," referring to Dad only as "a man on 12th Street in Brooklyn."

Here's how Dad and The New York Times told the story:

" 'I knew I wouldn't be able to listen to the broadcast, and I knew something was going to happen,' said Goldberg. ... 'It was the third game of the playoffs. That kind of game had to be climactic, even if it was a blowout.'

"Was Goldberg's mother, Sylvia, a baseball fan? No. Was she paying strict attention to the game? No, he said, 'she was paying attention to her only son.' ...

From the SI vault: The Day Bobby Hit The Home Run

"The night after the game, Goldberg wrote Hodges to ask if anyone at WMCA had recorded the game; if not, he would lend him his. Hodges replied quickly, and used the tape to make records as Christmas gifts. ...

"In later years, when Hodges related the tale of the tape, he would refer to Goldberg as a Dodger fan who made the tape so he could hear the voice of the Giants weep when Brooklyn won. A good yarn, but untrue.

I'd been thinking about Bobby Thomson, Russ Hodges and Dad just the other day when my son and I went to our first Braves game of the season -- our first game since Dad died a year ago in April.

It was a little before 7 p.m. at Atlanta's Turner Field, and the Braves were about to face the Giants -- now long since relocated to San Francisco. My son and I were sitting down to eat on the stadium's terrace when the matrix board began playing a video introducing the visitors.

Images of past pennants were flashing on the screen when it suddenly hit me -- these are the same Giants that once called New York's Polo Grounds home. And before I knew it, they were playing the call I've come to know so well -- Bobby Thomson hitting his "long fly ... into the lower deck of the left-field stands."

I wanted to phone Dad and tell him about it, at the same time realizing I couldn't -- that I'd even told the story about the call at his funeral.

And then I knew he was with us there in the stadium, smiling down on a perfect summer evening of baseball.